375 years ago today King Charles I arrived in Nottingham with his army and raised the royal standard (flag) above the castle officially declaring war on parliament. Charles was riding on his successful capture of Nottingham’s arms having failed to take the munitions of other cities, including Leicester.

However, two years later the Royalists returned and on the 30th May 1645 the Newarke, Leicester became the stage for one of the bloodiest sieges of the Civil War.

The buildings and fortifications that were once key features during the war now provide a part of the historical backdrop around DMU campus, such as the Magazine that housed the city’s weapons and ammunition and the Turret Gateway, also referred to as Rupert’s Gateway. Rupert of the Rhine was the nephew of Charles I and led the assault that burst through the Newarke fortifications and sacked the city.The gatehouse itself was destroyed so that now only the gateway survives. 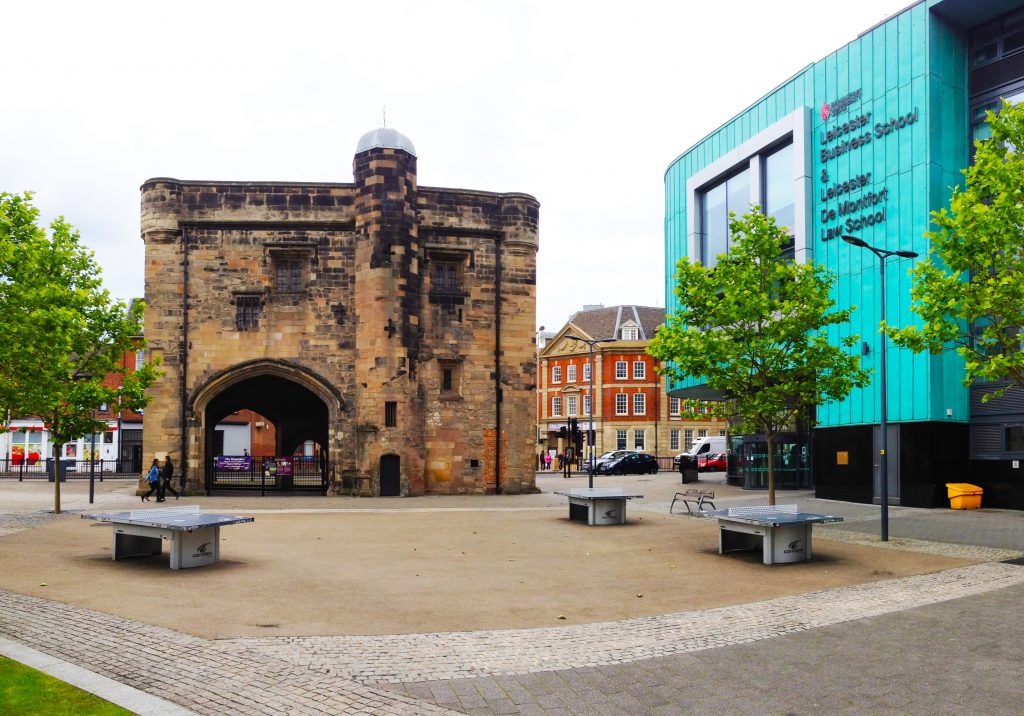 Magazine Gateway, Magazine Square. Built in the 15th Century as an entrance to the Newarke religious presinct, this building later became the munitions store during the English Civil War. 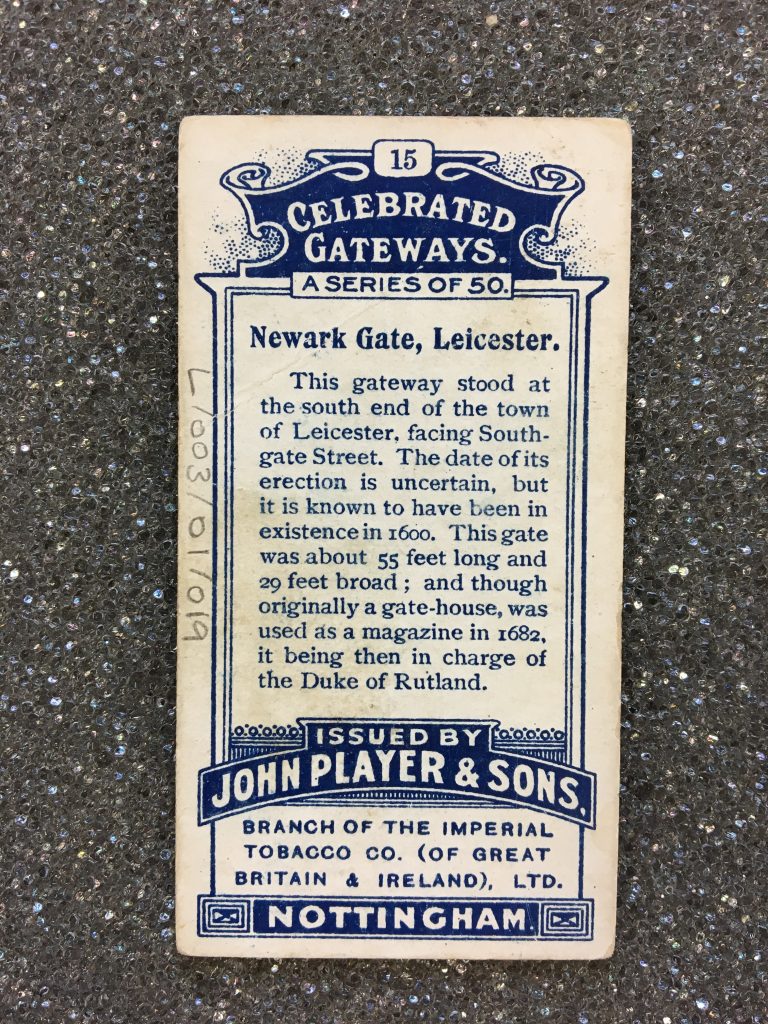 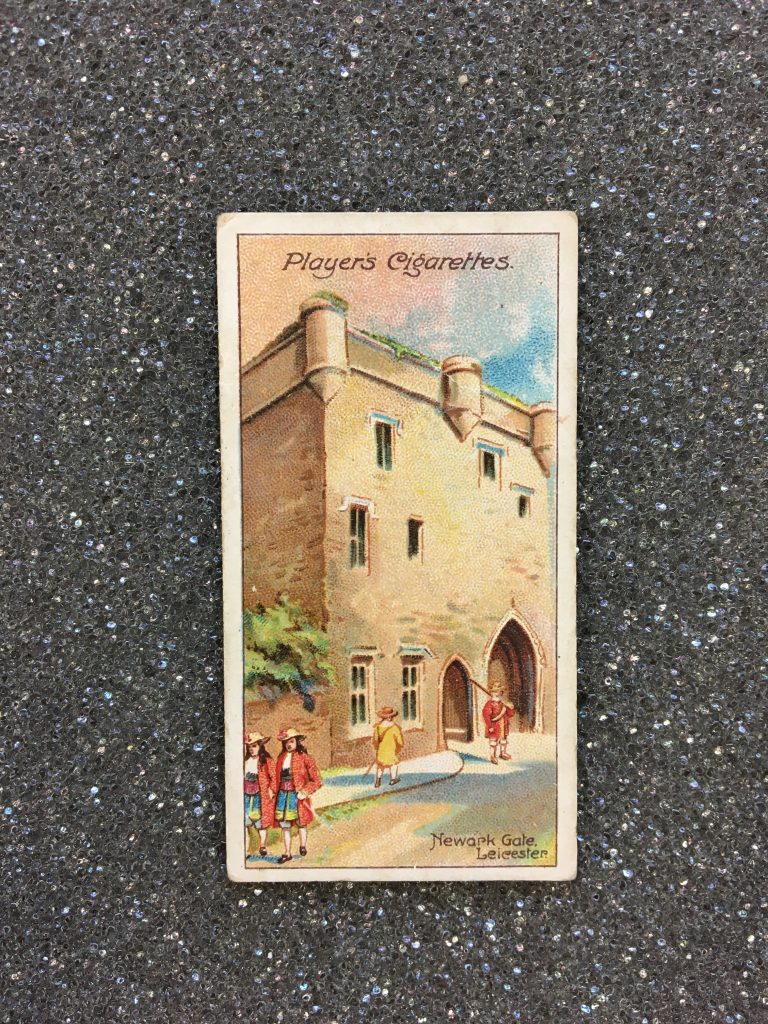 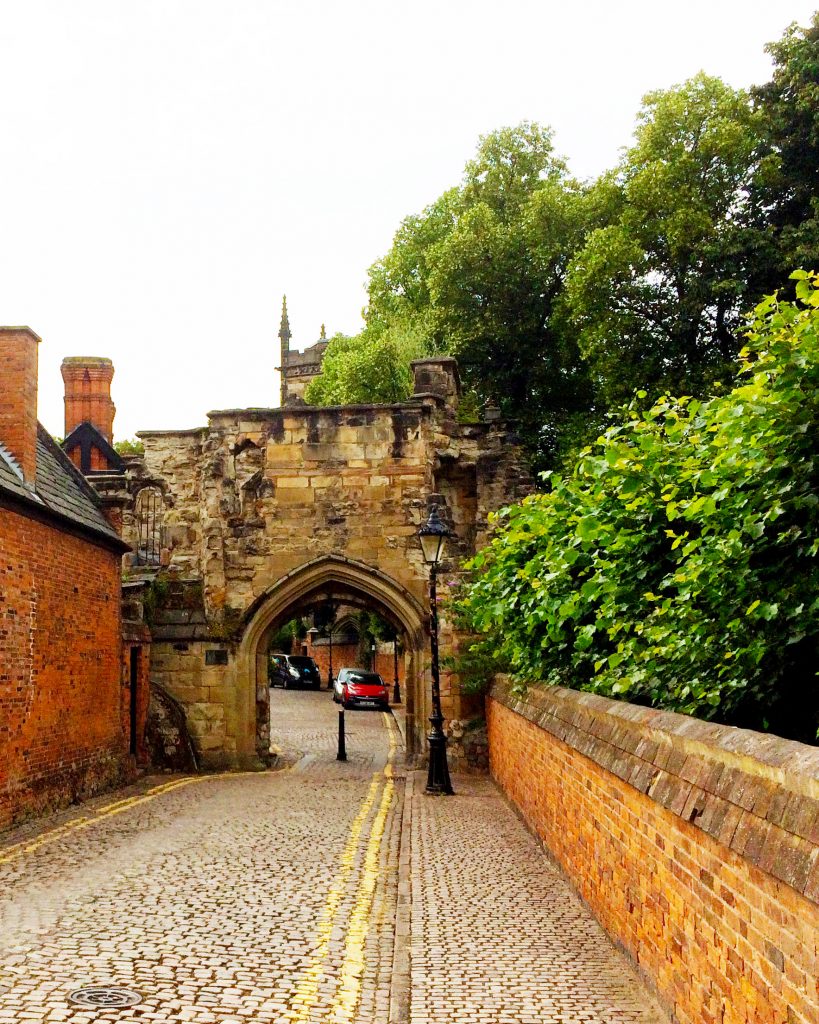 Turret Gateway, Castle View. Named after Prince Rupert who is said to have stormed the Gatehouse, however, some believe the name is inaccurate and refers to a neighbouring wall torn down in the 1800’s. 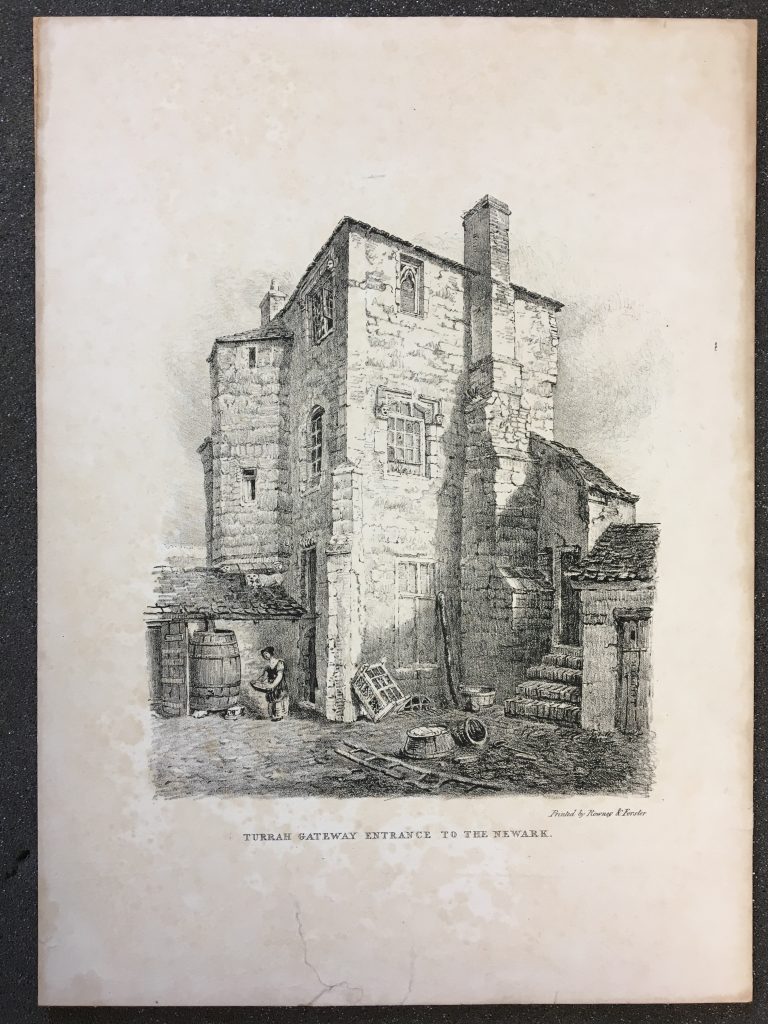 Engraving titled “Turrah Gateway Entrance to The Newarke,” Leicester. Printed by Rowney and Forster after a John Flower drawing, 1826.

Turret Gateway was damaged during the Civil War and more so in a riot that took place in 1832, but the image above helps to illustrate what the Gatehouse may have looked like during the time of Charles I.

After three weeks occupation the Newarke saw military action once more, when the Parliamentarians arrived and Leicester was recaptured from the Royalists. DMU Special Collections holds the Town Armour belonging to Trinity Hospital and it is possible that it saw action in one or both of the Newarke sieges. 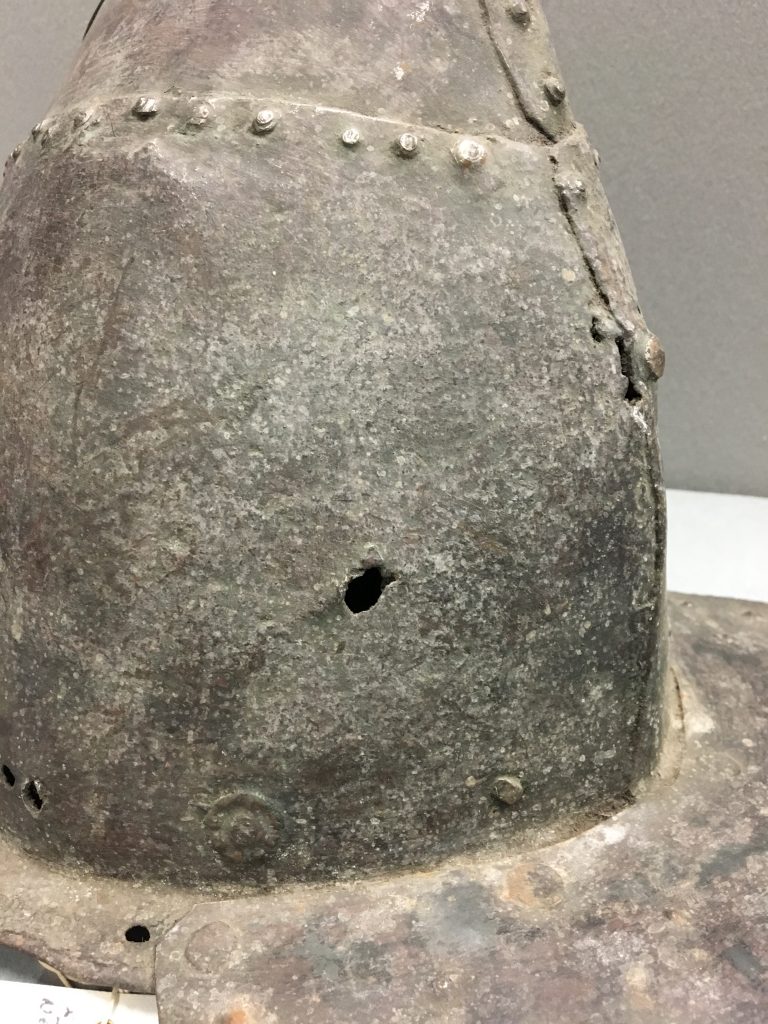 Town Armour Helmet, with curious hole, possibly from battle or from testing the helmets durability.

While the majority of the Town Armour  is accommodated in the DMU Special Collections, a selection of artefacts can be seen in the DMU Heritage centre.

The Town Armour collection consists of breastplates, back plates, gorgets and helmets that were typical of your standard pike-man

Also within the collection are nine halberds that are reminiscent of what the Uruk Hai would wield whilst storming Helm’s Deep (but that could just be me), as well as a ceremonial  sword complete with the Wyvern Crest of Thomas Crouchback that we are more familiar with from the Leicester Coat of Arms/City Arms. 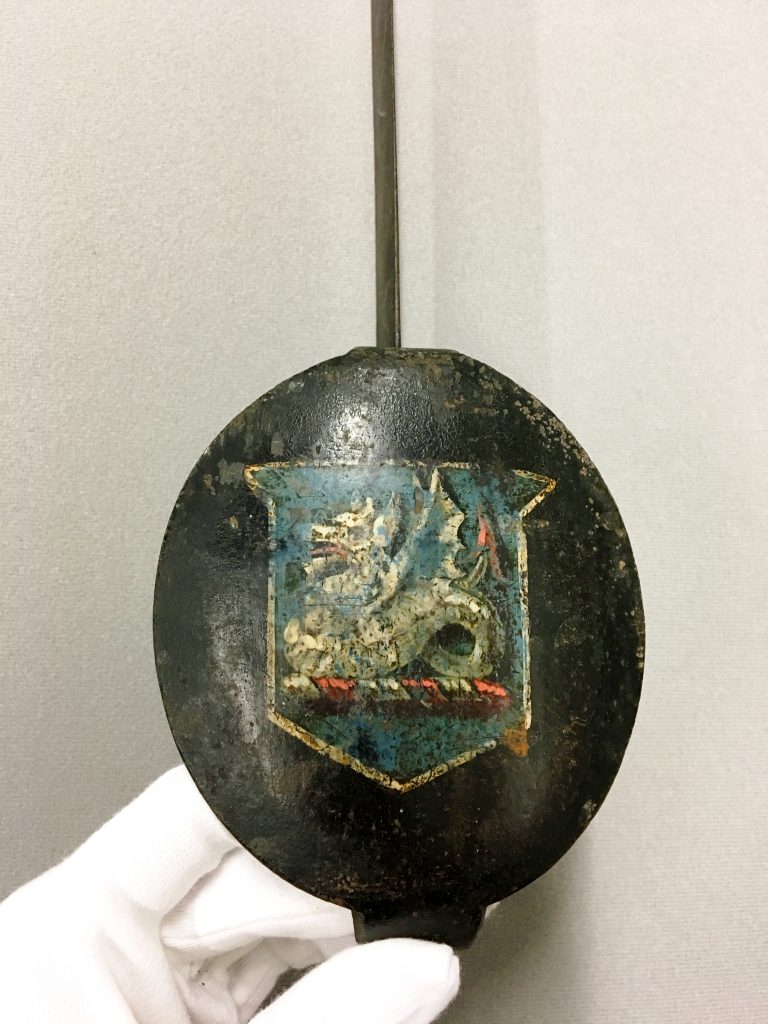 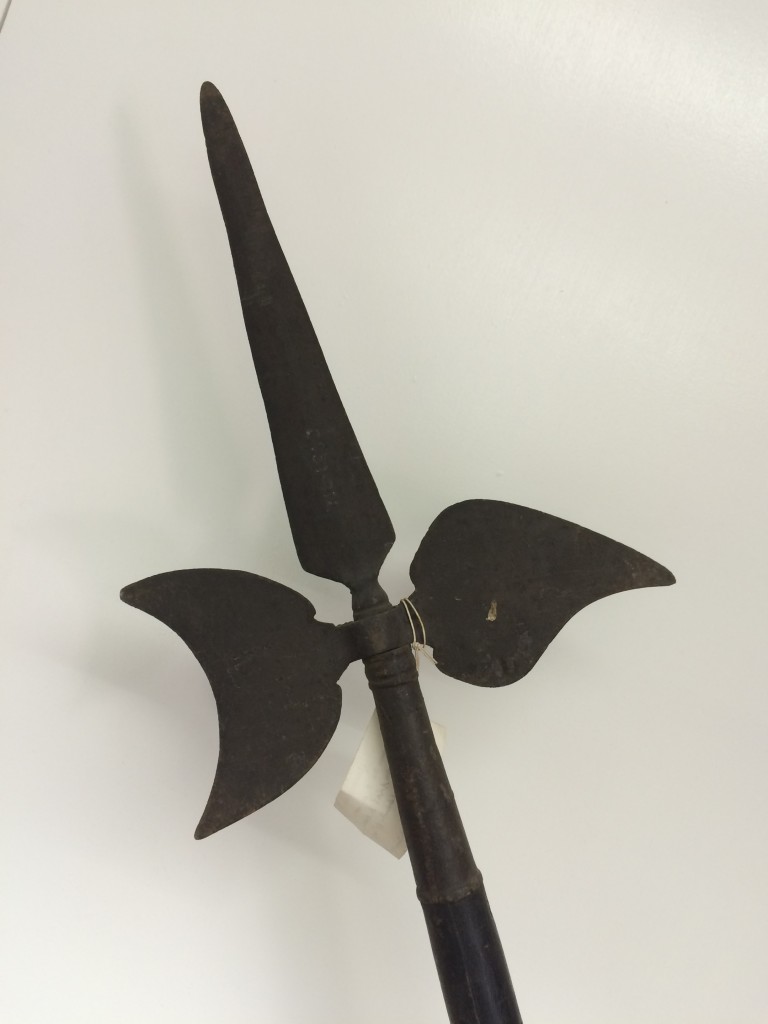