Today marks the bicentenary of Jane Austen’s death and 200 years on her novels continue to be lauded among the best in the English language. Like Shakespeare and Dickens, even if you’ve never read one of her works you are sure to have heard of her and her novels as they have come to exist in the cultural collective imagination. Pride and Prejudice, Sense and Sensibility and Emma are undoubtedly the most well-known and evoke images of rolling English countryside, stately homes, drawing-room drama, Regency frocks, and Colin Firth in a wet shirt – no wait, that’s Andrew Davies’ 1995 television version!

Moving on… so to celebrate the occasion, I thought I would showcase a few treasures from our collections that are either related to her works or provide a window into her times.

Jane Austen  (1775 – 1817) was born in Hampshire and although a popular author in her day (the Prince Regent was a huge fan and asked for Emma to be dedicated to him) she did not receive recognition as a great novelist until long after her death. All her novels were published anonymously, by “A Lady”, but all offer a beguiling glimpse into Regency life in rural England. The images below, taken from The Lady’s Monthly Museum, aka Polite Repository of Amusement and Instruction, 1801,  and La Belle Assemble, 1817, depict Regency fashion, and could almost be illustrations: 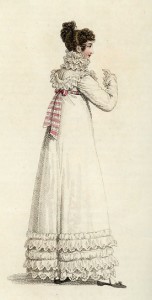 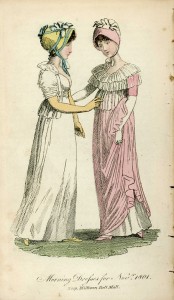 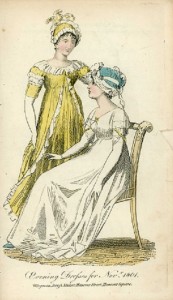 You can easily project your fave Austen character onto these figures: the lady on the far-left bears a striking resemblance to Jennifer Ehle as Elizabeth Bennet in BBC’s 1995 Pride & Prejudice. And the figures on the far-right could be the Dashwood sisters, Elinor and Marianne, in Sense and Sensibility.

From Regency fashion to furniture: some books from our Art Design and Architecture collection show a typical room layout and some furnishings and decorations from the day. 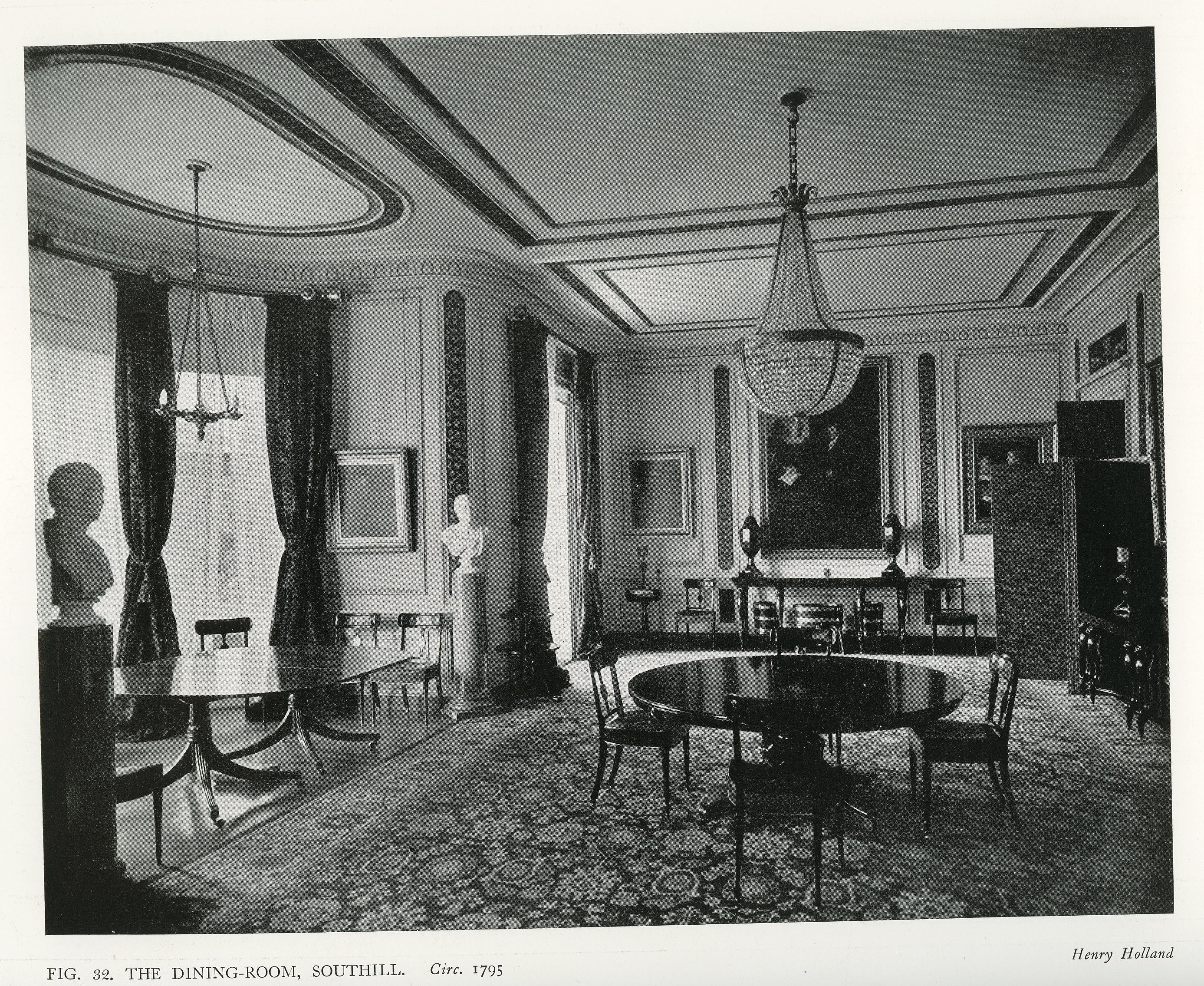 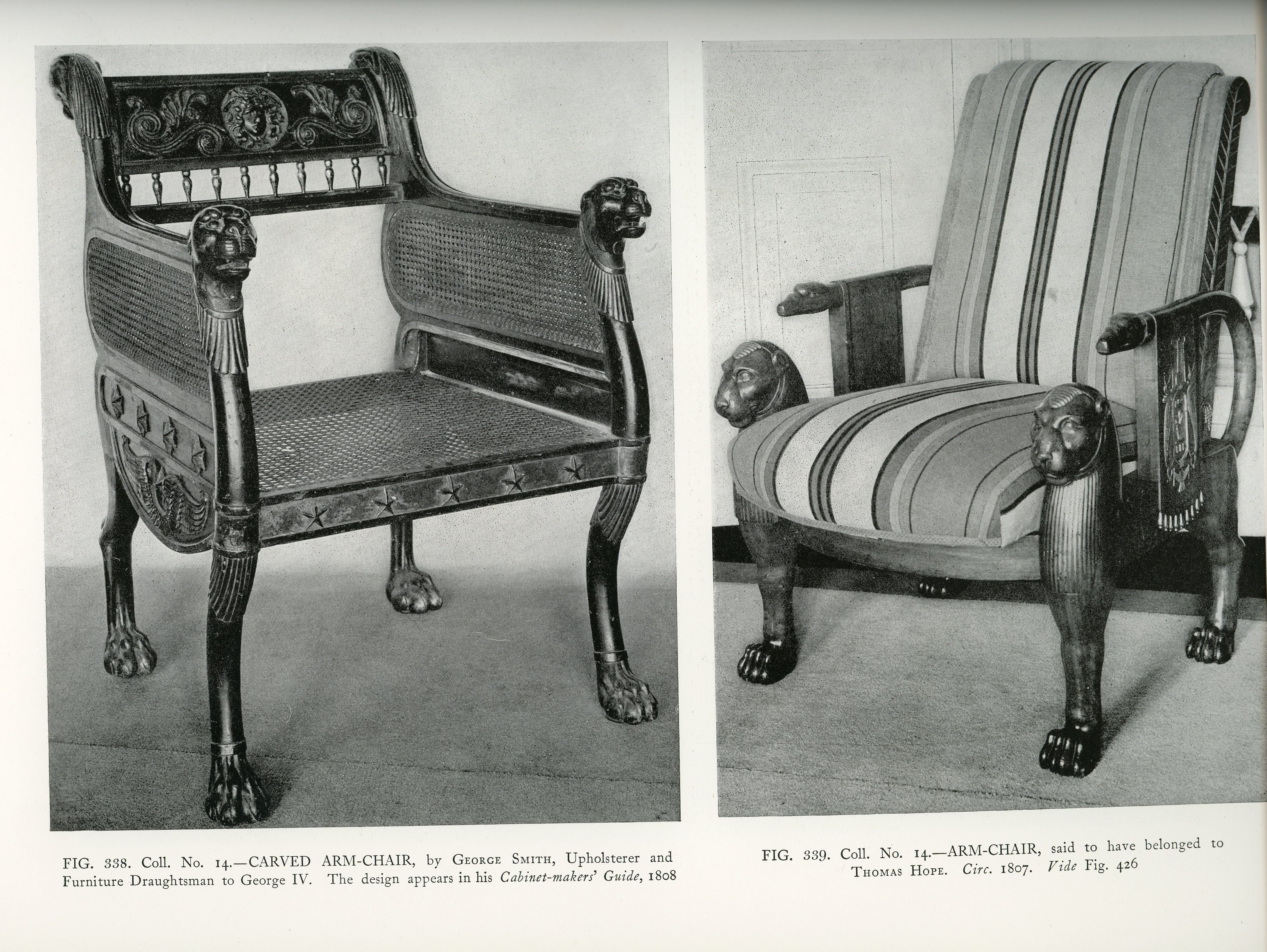 Two arm chairs dating from around 1808. 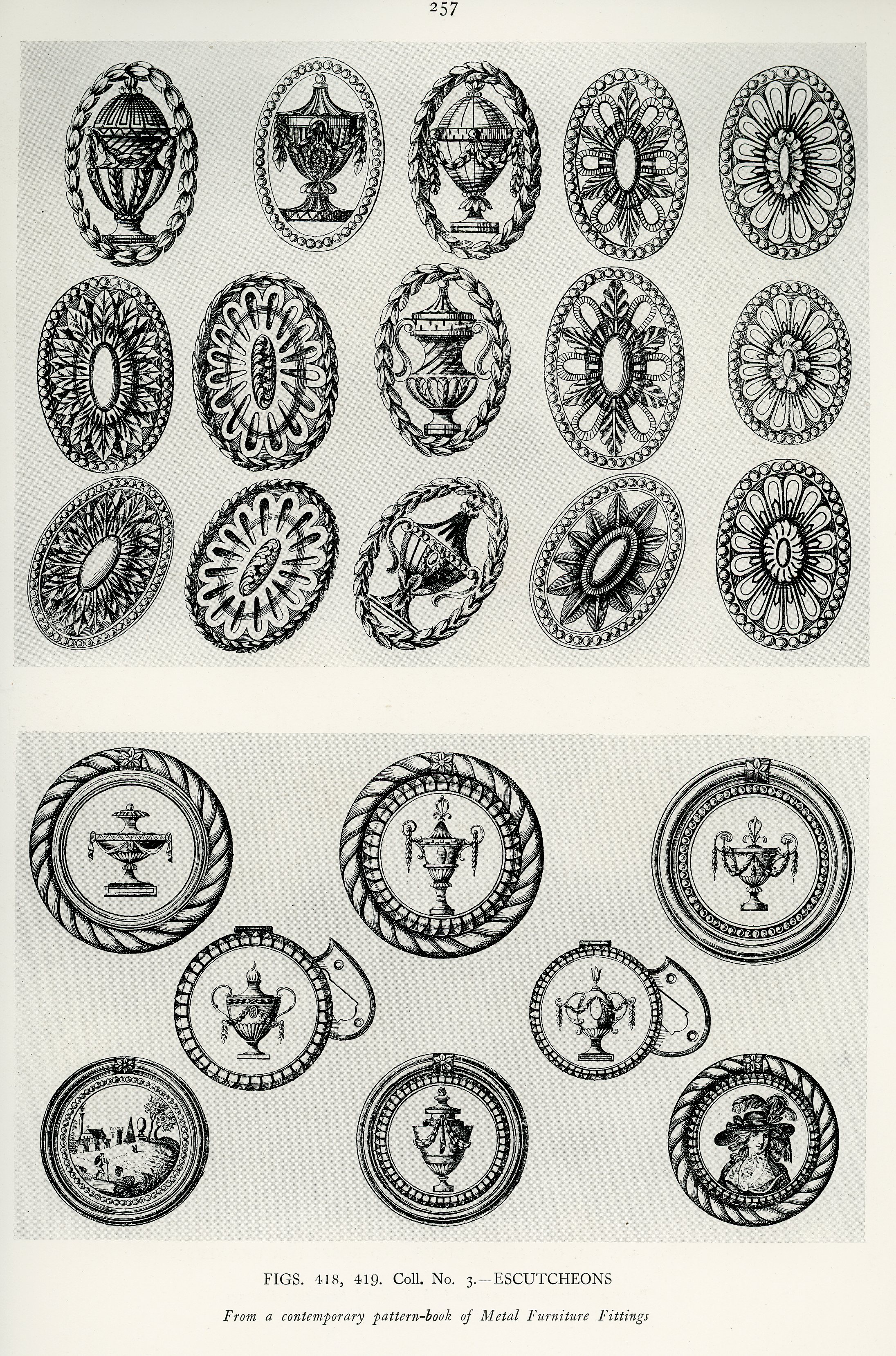 Escutcheons (decorative fittings used around keyholes and door handles) from a contemporary pattern-book.

While the the elegance of the Regency drawing room and the accomplishments of young ladies are often the topics of conversation in Austen’s novels, they are not without their social commentary and contextual references. One should always remember that Austen was writing during the height of the Napoleonic Wars (1803-1815) and a militia presence can be felt throughout her novels, reflecting the stationing of thousands of British Army troops along the South Coast of England in the early 19th Century as Napoleon continued his expansion across Europe and readied for an invasion of Britain. 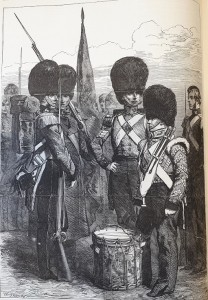 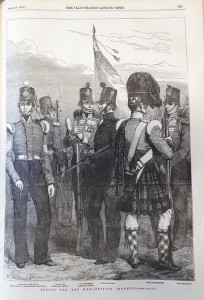 and Page 189 showing men from the Duke of Wellington’s Regiment. Wellington would defeat Napoleon at Waterloo in 1815.

While the naval Captain Wentworth in Austen’s final novel, Persuasion, cuts a rather dashing romantic figure whose love for Anne does not falter while he is away at war, the Redcoats (the army troops) do not always turn out so favourably, such as the dastardly Wickham in Pride and Prejudice. Again, this depiction reflects concerns of the time that not all the troops behaved in a moral and gentlemanly way while stationed in areas where no one knew them or their histories.

While all of this offers some wonderful insight into the construction of Austen’s novels, to round up my Austenmania trip I will finish by including some materials that relate to the adaptations of her works and their link with DMU. We are fortunate in the archive to be the custodians of the Papers of Andrew Davies, one of Britains most well-known television and film screenwriters who is considered an auteur in the field of classic novel adaptation. His most famous is of course the 1995 Pride and Prejudice but for something different I thought I’d dig out Northanger Abbey, as its journey from inception to production, taking nearly a decade, would make a fascinating case study. 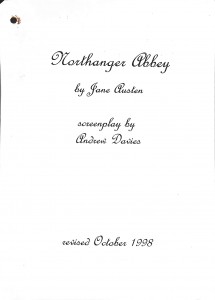 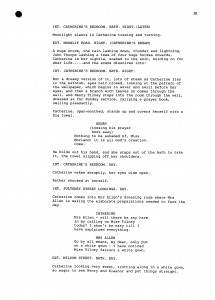 Page from the first draft written by Andrew Davies

As an an honorary graduate and visiting Professor of the university, Andrew Davies has been involved with many events at DMU, such as Cultural Exchanges week, and last year he gave a public Q&A and interview. DMU is also home to the Centre for Adaptations and Jane Austen and her works have long been the focus of many an interesting study day, such as this one from 1996: 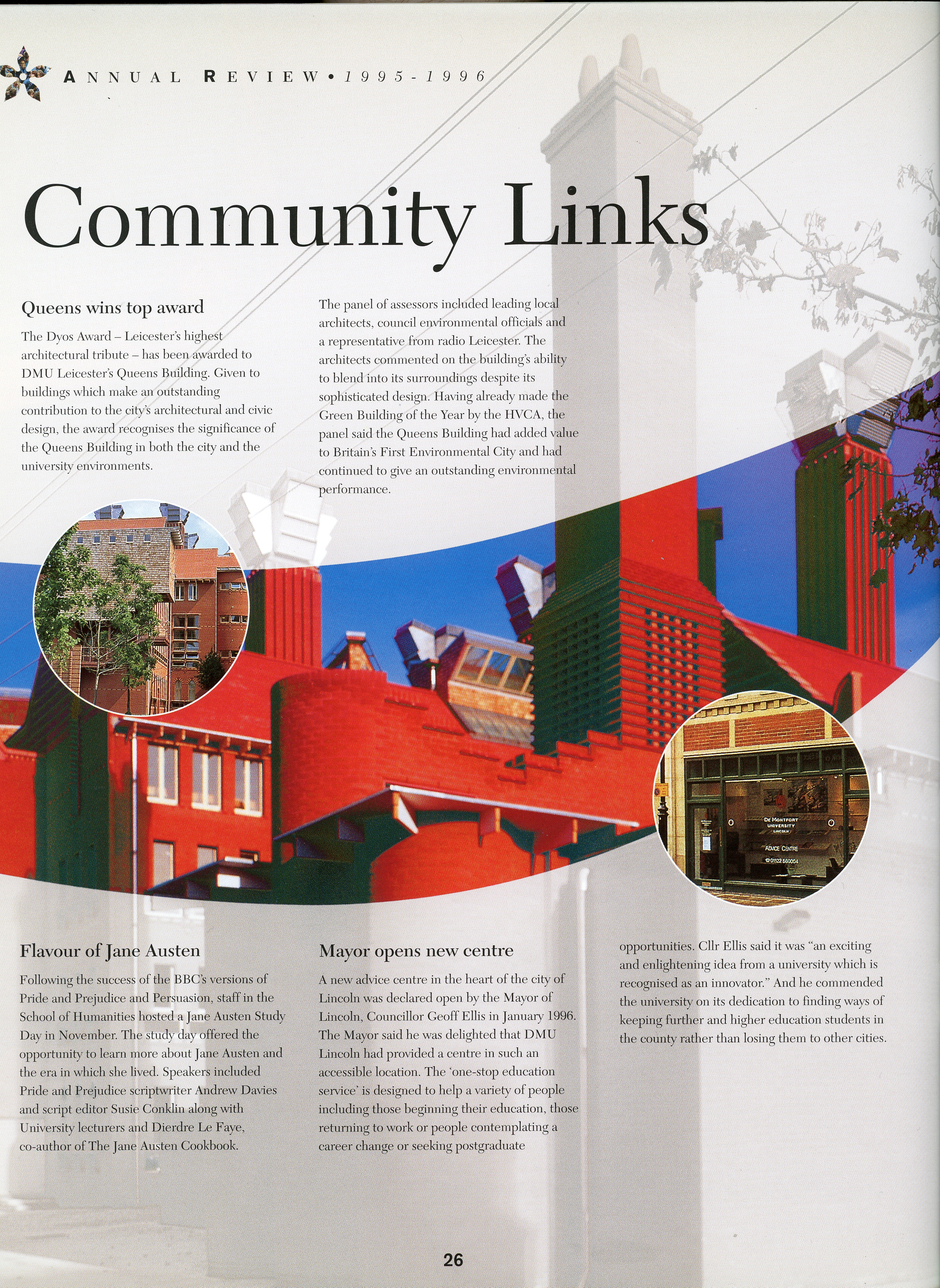 Davies was a speaker at this Jane Austen Study Day hosted by the School of Humanities following the success of the BBC’s ‘Pride and Prejudice’. Taken from ‘Annual Review: 1995-1996’.

Austen biopics and adaptations of her work have been plentiful in recent years and soon she will be more ubiquitous than ever – given her image is to feature on the reverse of the new Polymer £10 note that goes into circulation today. While there are many events across the UK celebrating Austen’s achievements, if you can’t get to one you can always have a marathon Davies DVD fest, come and see the scripts in the archive, or settle down to read one of her novels; perfect summer reading…