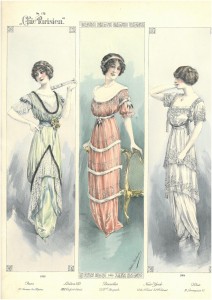 This beautiful set of plates appears to date to sometime around 1909 to 1914. They illustrate spring, summer, autumn and winter fashions for women, focussing on coats, dresses, skirts and blouses: 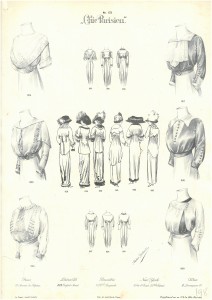 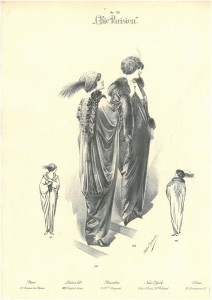 The models are shown in a variety of scenarios such as at the races, promenading in the park or by the sea, and at evening functions or balls: 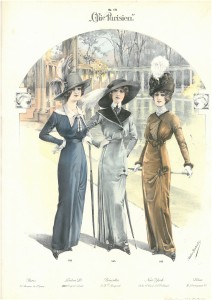 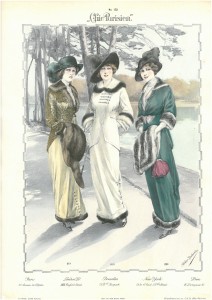 There are a small number of illustrations of fashion for teenagers and younger girls: 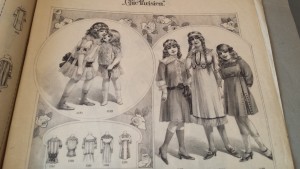 Some plates include descriptions of the clothing and reports on the latest trends, in French or English. The language of the trend reports is whimsical and flowery:

“Quite astonishing are the many styles of our hats. There are big ones and hats of a small size, some are very flat while others are again uncommonly high. Some first-class bonnets seems to be inspired by the graces of Trianon, others again represent portraits of Lawrence and Gainsborough…“

Research was conducted on the publisher of the plates, Atelier Bachwitz, a fashion publishing company founded by Arnold Bachwitz (1854-1930). 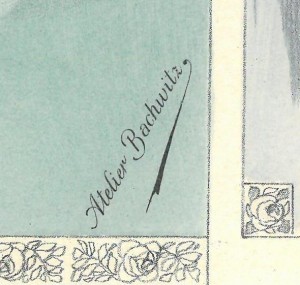 The company published over 50 fashion magazines, of which ‘Chic Parisien’ was the most popular, influencing global trends. The company was based in Vienna. Their headquarters on Lőwengasse were designed by Anton and Josef Drexler in 1908 and are now the premises of the Palais des Beaux Arts. The magazine was printed by Josef Eberle. After Arnold’s death his widow Rosine continued the business until it was seized by the Nazi Party. She and her daughter were both killed in Theresienstadt concentration camp.

The plates are available to view in the Special Collections Reading Room, Kimberlin Library 00.21, Monday to Friday, 9 to 5.

When I was 13 every careers questionnaire I did at school suggested I become an archivist. In rebellion I studied History of Art at Cambridge and the Courtauld Institute before giving in to the inevitable and undertaking a qualification in Archives Administration at Aberystwyth University. I worked at King’s College London Archives and the London Metropolitan Archives before becoming the Archivist here at DMU in January 2013. My role is hugely varied: answering enquiries and assisting researchers, sorting, cataloguing, cleaning and packaging archival material, managing our environmentally controlled storage areas, giving seminars, talks and tours, researching aspects of University history, liaising with potential donors and advocating for the importance of archives within the organisation. I am one of those incredibly fortunate people who can say ‘I love my job’ and really mean it.
View all posts by Katharine Short →
This entry was posted in Archives and tagged 1910s, costume, fashion, history, magazines. Bookmark the permalink.