Today Explore Your Archive is delving into the world of food and drink with the hashtag #ediblearchives.

Travelling expands the mind and offers new experiences – and trying out local dishes is a huge part of being abroad! Menus, ingredients and meal-time rituals all vary considerably from country to country and can provide a traveller with a real sense of culture shock.

In 1950 J Hurd of the Leicester College of Technology School of Textiles visited the United States of America. This visit was prompted by the Anglo-American Textile Education Conference, held in England in 1949, when members of the National Council of Textile School Deans had visited Leicester and insisted on hosting a reciprocal trip to the States. Special Collections holds a report of the visit which describes almost every meal eaten during the trip (ref D/031/Q/01). 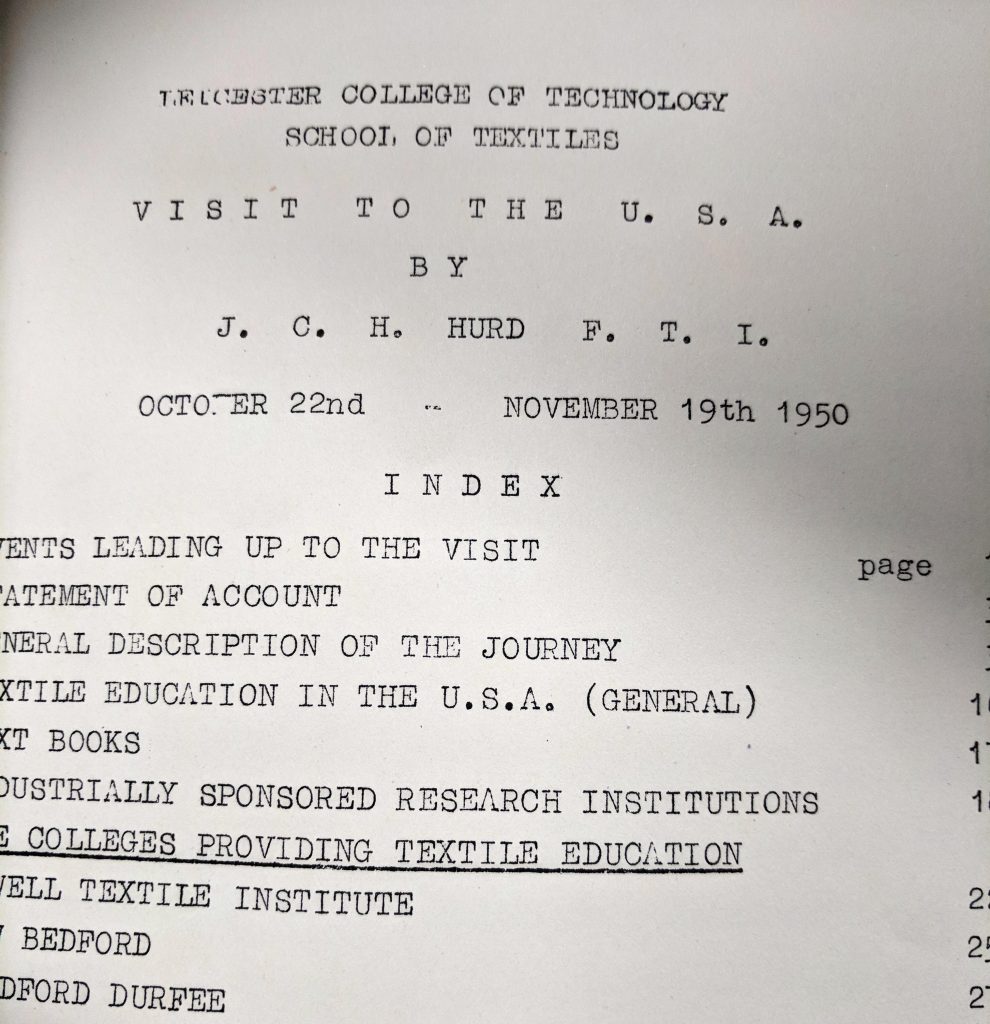 Only a few years after the end of the Second World War, England was still rationing many foodstuffs and in a period of austerity. The most striking thing about Hurd’s account of his visit is his constant amazement at the amount and cheapness of the food he is offered. His account of the trip begins by noting that he kept his luggage well under the maximum weight as he intended to bring back a 10lb ham. Having arrived in New York, Hurd wrote that:

“from the moment of our arrival there until the end of our stay in America we were treated in a manner far beyond my ability to set down in writing … we had our first meal in the U.S. Imported Holland Ham, sliced Turkey served with fruit salad plus a sweet and coffee, cost $1.75 + 25 cents tip.”

In Providence the visitors were treated to a “Shore” dinner: “The first course of such a meal consists of an array of many varieties of shell fish.” That evening they were invited to dinner at the home of the President of th

Hurd comments particularly on the plentiful repast, noting huge bowls piled high with every variety of fruit and buffets with trays of “Hamburgers and Frankfurters”. The amount of food available at a relatively cheap cost is another recurrent theme:

Back in New York at the end of the visit Hurd and his party were treated to dinner in Kent, Connecticut:

“The dinner was buffet style and a grand affair with a main dish of lobster and ham taken together. “Seconds” was insisted upon.”

In April 1977 another member of staff undertook a trip of a very different nature. David Bethel, the Director of Leicester Polytechnic, was invited to tour China as part of a British Council delegation. At this date China was largely cut-off from outside visitors. Mao Zedong had died in 1976 and the Cultural Revolution was finding its way without his guidance. The British Council delegation were treated as VIPs but constantly escorted by Ministry of Education officials as they toured educational facilities across the country. 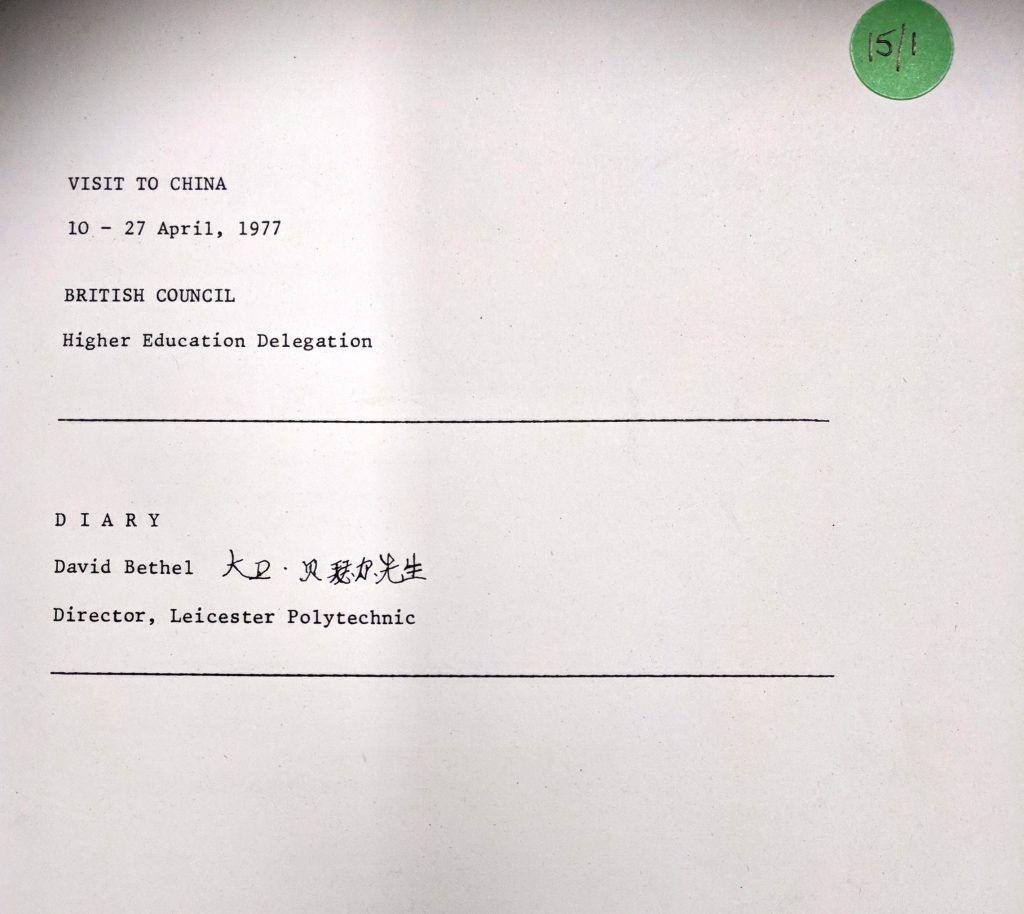 Bethel’s diary records some meals enjoyed by the group. In Peking (or as he writes “more properly Bei Jing“) they attend a banquet given by the Minister of Education “at Peking Duck restaurant, said to offer the finest Peking cuisine and the meal certainly confirmed this“. The visitors were introduced to unusual local specialities:

In addition Bethel is full of praise for the Chinese rail system, particularly when compared to English transport: 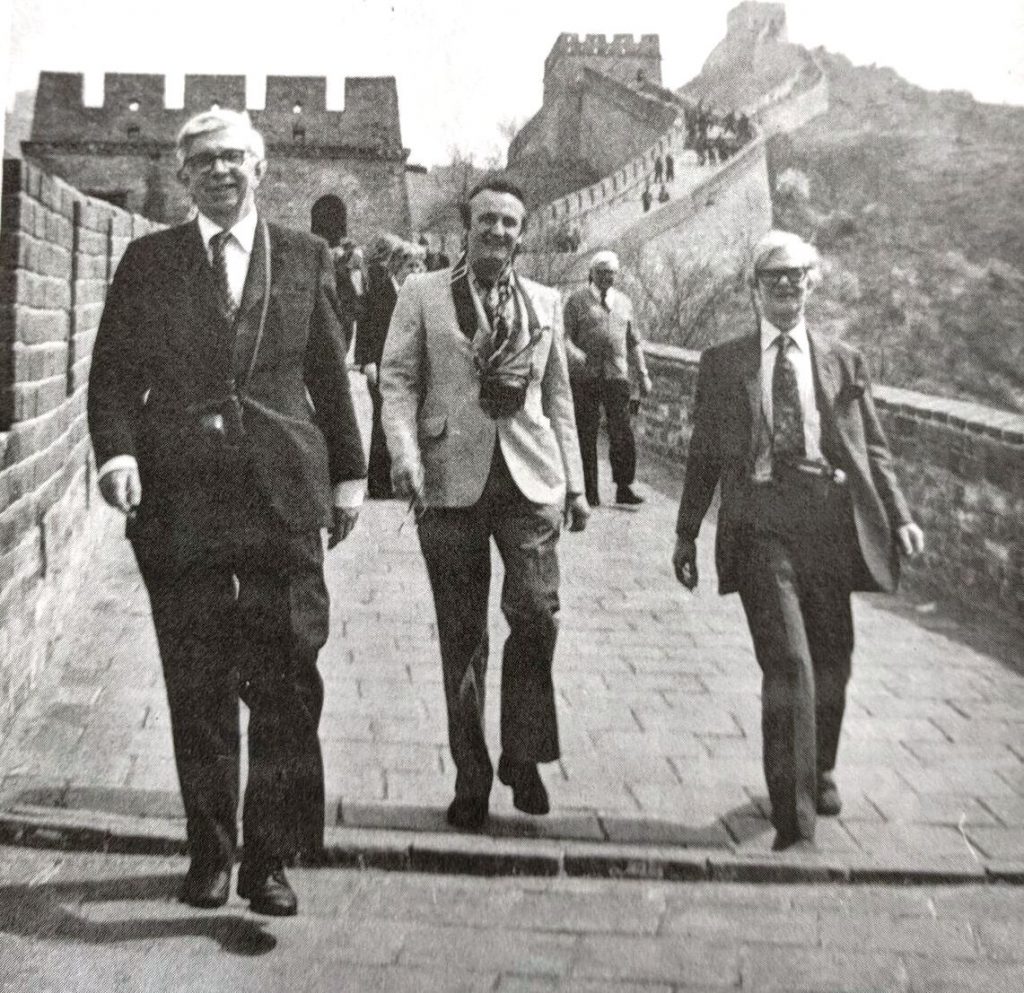 David Bethel (centre) at the Great Wall of China.