If you have used Google today you will have seen that the search engine is celebrating the 182nd birthday of William Morris.

In our Special Collection we hold the proofs of “The Nature of Gothic” by John Ruskin sent to William Morris, the publisher, for checking prior to printing. These proofs were owned by Robert Proctor. Proctor had met William Morris in 1894 and was a great admirer of his works and political views. He is known to have collected books and ephemera from the Kelmscott Press, explaining how he got these proofs.

Below are scans of Morris’ annotations. 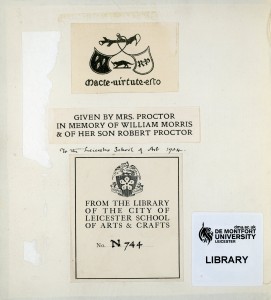 The volume includes the bookplate of Robert George Collier Proctor and an inscription that it was donated by his mother in his memory. It seems that Robert’s mother distributed some of his collection to various libraries, including sending this volume to the Leicester School of Art. Proctor is known to have met Ernest Gimson, an alumnus of the School, at meetings of the Society for Protection of Ancient Buildings; and it is possible that awareness of the School came from this quarter. 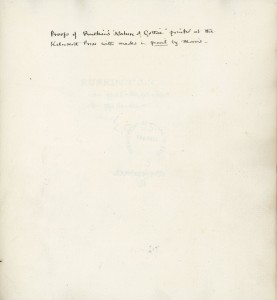 The proofs have been annotated with corrections; according to a note on this flyleaf. Some of these annotations are by William Morris. 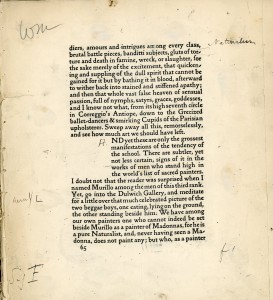 Top left of the image are the initials WM.

Morris corrects the symbol “&” and suggests the word written “and”. 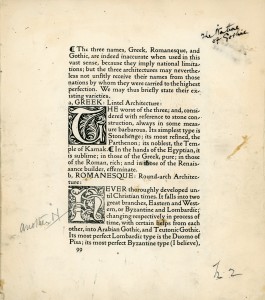 Morris requests that “another N” be used as the illuminated letter in the lower paragraph. 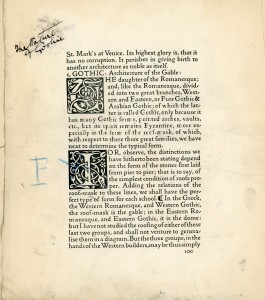 Morris annotates that the incorrect illiminated letter “I” has been used instead of “F”. 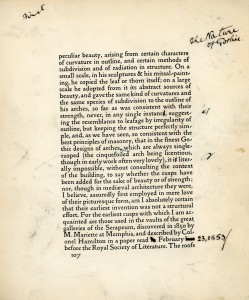 The work included a technical description of Venetian art and architecture and an analysis of the social and cultural conditions which had brought about the particular Venetian style. The work praised the Gothic and Byzantine forms, influencing Victorian architects who began to introduce these elements into their work. The Nature of Gothic was a chapter within the Stones which outlined the six key characteristics of the Gothic style: savageness, changefulness, naturalism, grotesqueness, rigidity and redundance. Having thus defined the “inner spirit” of Gothic Ruskin went on to define its outward forms through diagrams of arches and ornamentation. The chapter was most notable for the way Ruskin contrasted the Gothic craftsman to the labourers of his own time. He argued that social unrest was caused by industrialization and divided labour because the craftsman was reduced to the status of a machine. The chapter proved immensely influential and was published separately as an essay, once in 1854 and once in 1892 by the Kelmscott Press belonging to William Morris, who acknowledged the importance of the chapter in his introduction.