Today is Andrew Davies 80th birthday and as a way of marking this special occasion I thought I would showcase something from the archive (Papers of Andrew Davies). In my previous post I documented Davies’s rise as a screenwriter, author, and adaptor, highlighting some of his most famous and best-loved adaptations, such as Pride and Prejudice. So today I thought I would do something different and exhibit some of the equally fascinating unproduced scripts that we have in the collection. 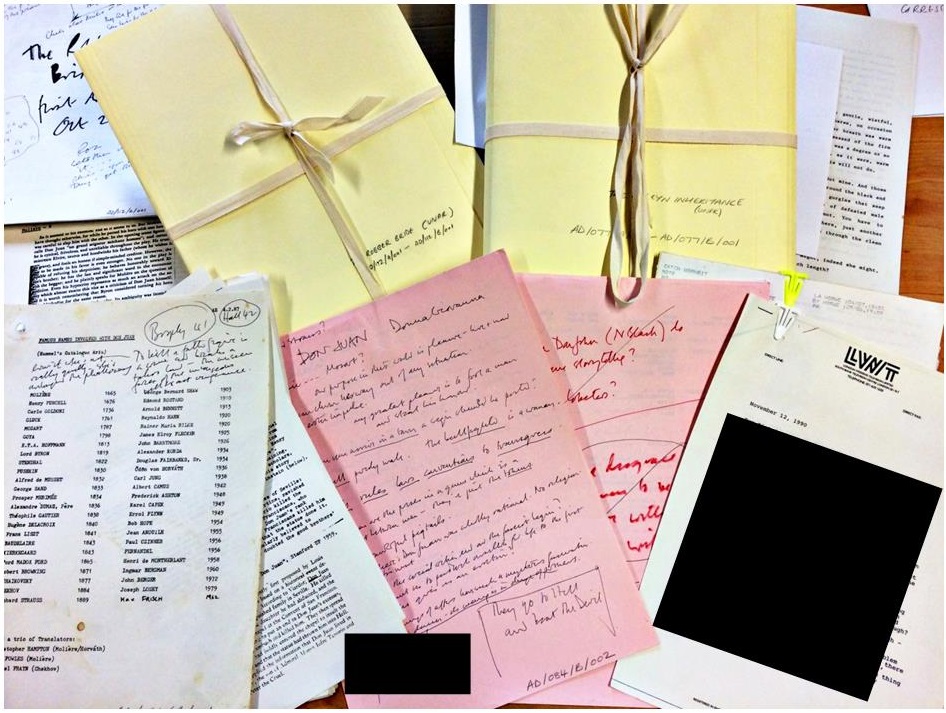 Selection of drafts, notes, and correspondence from the unproduced section of the collection.

The collection comprises of over 30 unproduced screenplays that include further classic novel and contemporary classic adaptations, such as Alexandre Dumas’s The Count of Monte Cristo (1845), Henry James’s The Spoils of Poynton (1897), Ian McEwan’s The Child in Time (1987) and Margaret Atwood’s The Robber Bride (1993). 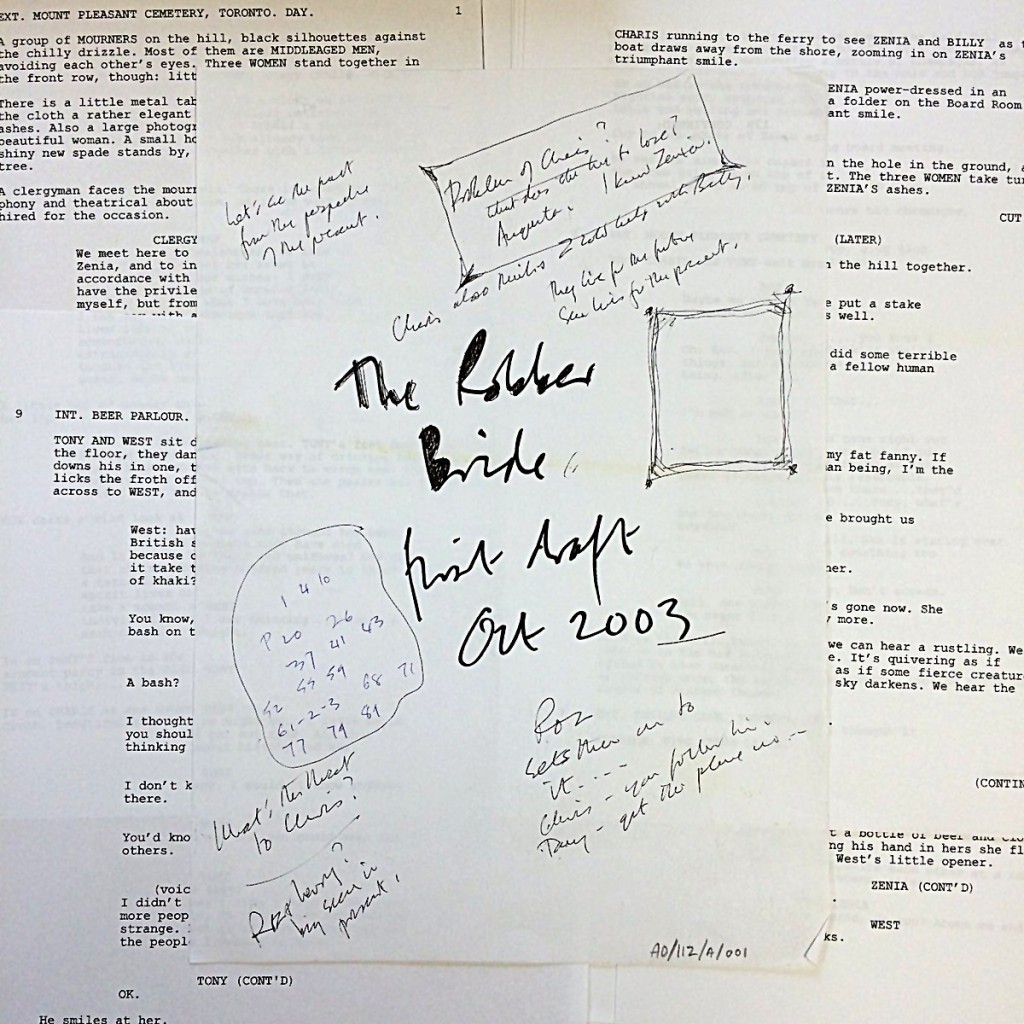 Draft script and cover page of ‘The Robber Bride’ with some handwritten annotations by Davies.

But Davies has always had an enthusiasm for adapting historical figures and events and this can be seen in his produced works, such as Eleanor Marx (1977), The Chatterley Affair (2006), and A Poet in New York (2014) but interestingly there are many more titles in this area in the unproduced collection. Draft scripts include adaptations of the lives of a diverse range of people, such as Rossini, the Italian composer, the legend of Pope Joan, the world’s only (allegedly) female Pope, the Israeli spy, Eli Cohen, and British socialite, Lady Docker. 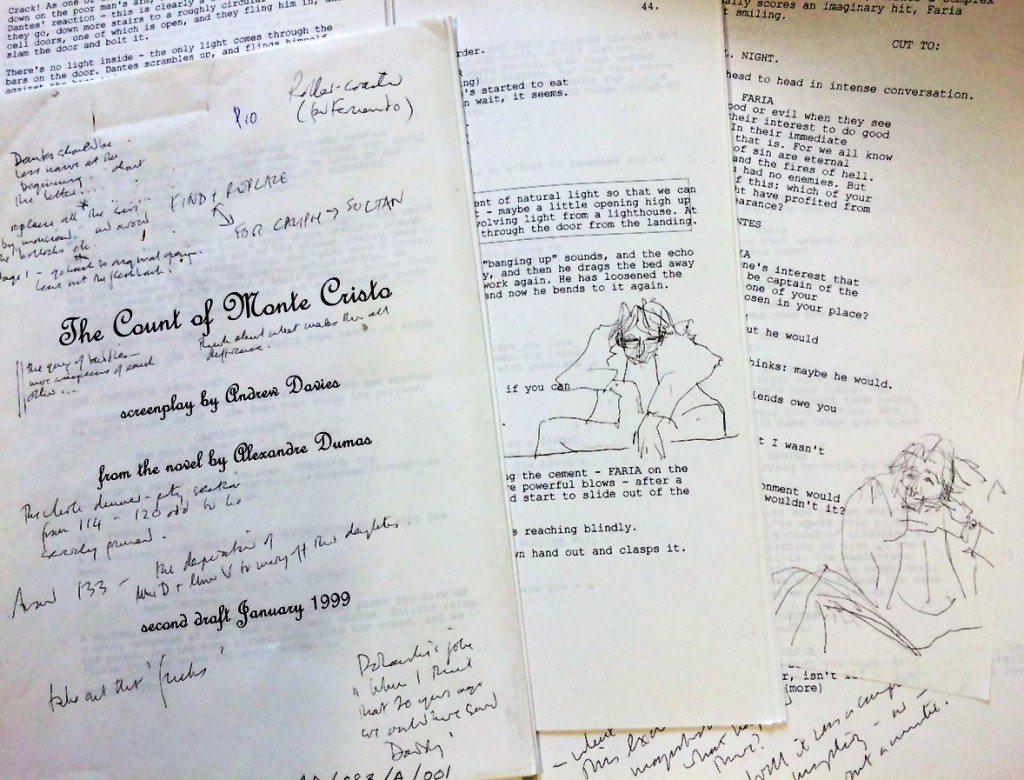 Draft script of ‘The Count of Monte Cristo’ with extensive handwritten annotations and sketches by Davies.

Among this part of the collection is perhaps one of the most exciting scripts I found while working on the project: an adaptation of Philippa Gregory’s The Boleyn Inheritance (2006) and both novel and adaptation focus on retelling the lives of Henry VIII’s fourth and fifth wives, Anne of Cleves and Katherine Howard. As an adaptation scholar, I was at the time working on Gregory’s intertextual use of fairy tales and myths within her historical novels and so it was fascinating to see how this element of her work, so frequently overlooked by critics, had been taken up by Davies for his script.

Extract from the first draft of ‘The Boleyn Inheritance’, 2008

With the rights to this script still owned by the BBC Davies said in an interview he is still hopeful this adaptation will make it to the screen one day.

My work in this area will form the basis for a journal article, but in the meantime I will be delivering a paper next week at the Adaptation and History Conference (Centre for Adaptations) held at St. Anne’s College, Oxford. The annual conference itself is a well-known event attended by adaptation scholars and Davies enthusiasts (and sometimes even Davies himself), so hopefully, I will see some of you there but the collection is open and ready to view if you fancy a trip to the DMU Archive.

P.S. Thanks to Jonjo Elliott for helping with the pics : D