Today was the first day that the DMU Heritage Centre and the Trinity Hospital Chapel were both open for Heritage Sunday. Heritage Sunday is run by Leicester City Council and allows the public to access buildings that are normally closed, including the Magazine Gateway, Wygston’s House, Leicester Castle and Castle Motte and Bailey. 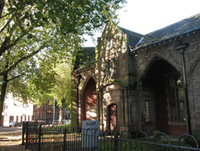 Hopefully anyone who can’t make it to the Heritage Centre during the week will come and visit on one of these Sundays.