To celebrate the International Archives Day theme of democracy, here is a student illustration of Simon de Montfort from the College of Art Diary for 1950 (reference D/025/08). 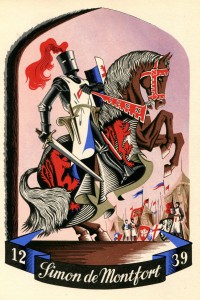 Simon de Montfort was a French nobleman who inherited the title and estates of Leicester. He led the 1263 rebellion against King Henry III of England, and in 1264 became de facto ruler of England when he captured the King at the Battle of Lewes. The King was a figurehead and decisions rested with his council, subject to consultation with Parliament. In 1265, de Montfort called a Parliament and summoned not only barons as was usual, but also knights, churchmen and burgesses from major towns. This gathering is sometimes referred to as the first English parliament as it was the first to include ordinary citizens. De Montfort was later killed by loyal forces to the King in the Battle of Evesham.

The date 1239 on the illustration refers to the year that de Montfort won full recognition of his claim to the title of Earl of Leicester.