DMU Archives has many sources which illuminate the history of dance teaching at DMU and its predecessors.

A BA Hons in Performing Arts was first offered by Leicester Polytechnic in the 1978/79 academic year. It was taught by the Department of Expressive Arts, which was part of the Faculty of Art and Design. Students could choose to major in Dance, Drama, Music or Arts Administration. Dance students took courses in dance study, anatomy and physiology, rhythm, voice and sound, choreography, notation, history of dance, dance aesthetics and performance workshops. 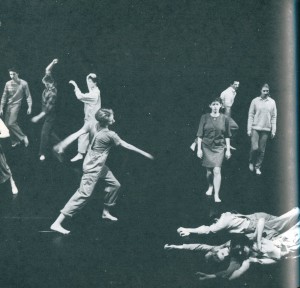 DMU’s Centre for Excellence in Performance Arts opened the PACE building in 2007. Below are the opening event ticket and a page from the commemorative booklet: 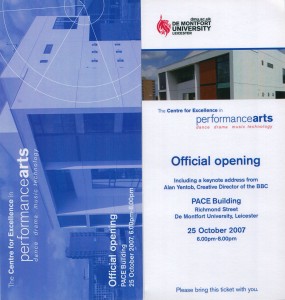 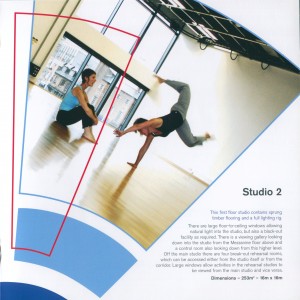 Of course dancing has long been a popular leisure activity. The press cuttings volumes are full of reports about student dances, balls and fancy dress parties. The arts students were expected to demonstrate their creativity when assembling their costumes as this cutting from 1938 demonstrates: 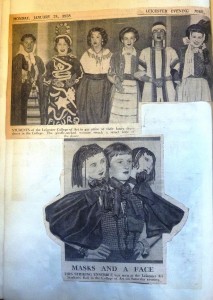 DMU Archives also holds the records of the Foundation for Community Dance (see here for a catalogue). The Community Dance and Mime Foundation (CDMF) was formed in 1988 and was based at Leicester Polytechnic, sharing office space with the Department of Expressive Arts. In 1994 the association decided on a new name and focus, becoming the Foundation for Community Dance and moving to central Leicester offices. The FCD is a national development agency and lead body for community dance, providing support, training and information to community dance practitioners. Despite moving away from the campus, the FCD maintains a knowledge exchange partnership with De Montfort University. 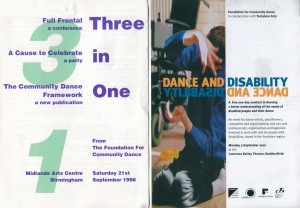 If you are interested in any of these sources please tap, spin and waltz your way down to the Archive!

When I was 13 every careers questionnaire I did at school suggested I become an archivist. In rebellion I studied History of Art at Cambridge and the Courtauld Institute before giving in to the inevitable and undertaking a qualification in Archives Administration at Aberystwyth University. I worked at King’s College London Archives and the London Metropolitan Archives before becoming the Archivist here at DMU in January 2013. My role is hugely varied: answering enquiries and assisting researchers, sorting, cataloguing, cleaning and packaging archival material, managing our environmentally controlled storage areas, giving seminars, talks and tours, researching aspects of University history, liaising with potential donors and advocating for the importance of archives within the organisation. I am one of those incredibly fortunate people who can say ‘I love my job’ and really mean it.
View all posts by Katharine Short →
This entry was posted in Archives and tagged dance, performance arts, performing arts. Bookmark the permalink.