May 12th has been celebrated as #internationalnursesday since 1965 as a way of appreciating and raising awareness about the important and diverse roles nurses play in our society. The date is significant because it is Florence Nightingale’s (1820-1910) birthday, a social reformer and the founder of modern nursing. 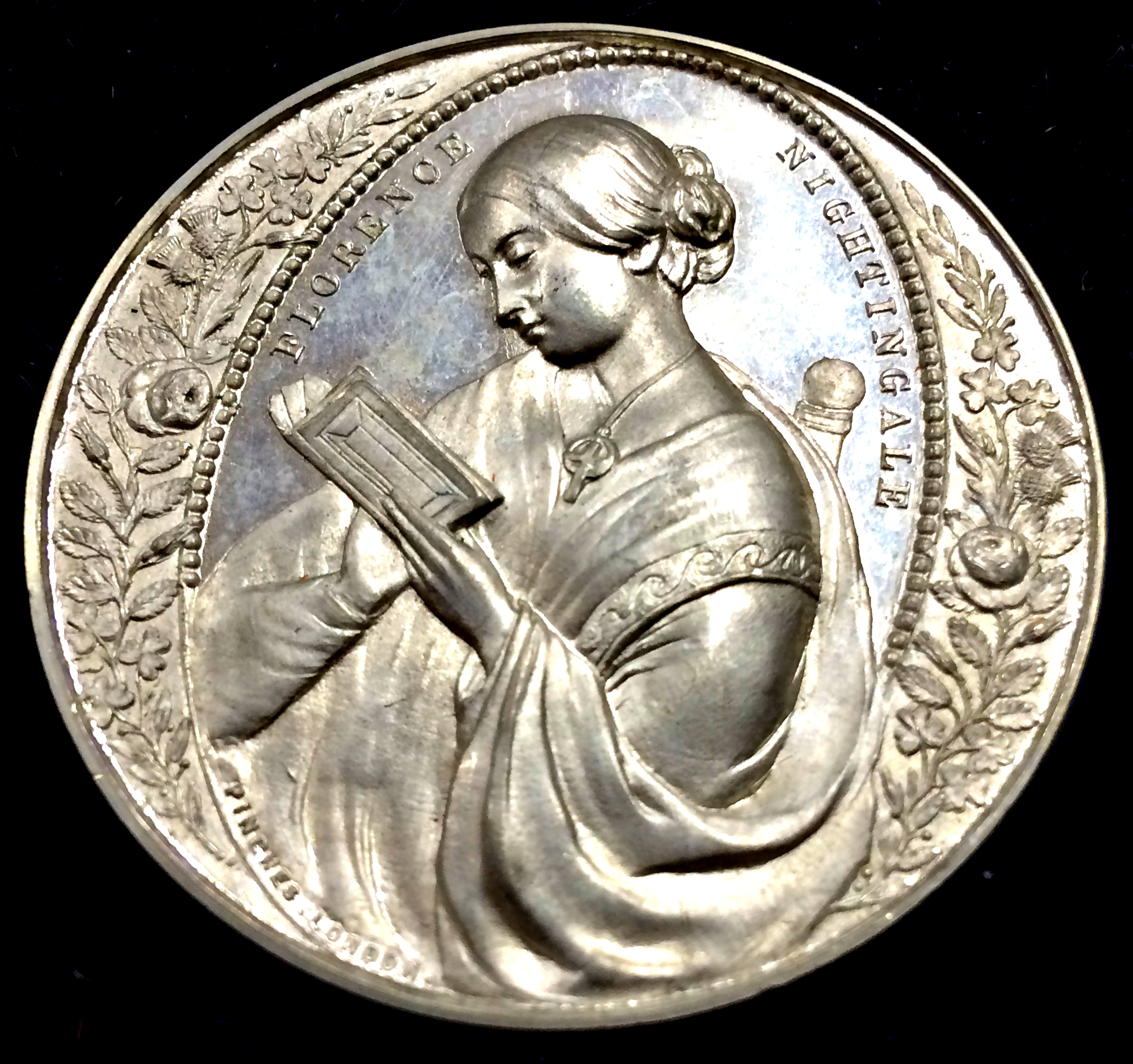 Commemorative medal produced to celebrate Nightingale’s work during the Crimean War (1853-1856). The reverse reads: “as a mark of esteem and gratitude for her devotion to the Queen’s brave soldiers”.

De Montfort University and Leicester has a long history of nursing and midwifery training and so today seemed like a wonderful opportunity to acknowledge the valuable work of all nurses past and present (from those just beginning their training to the long-serving veterans) by showcasing two major collections, the School of Nursing and Midwifery and the Pauline Wells Collection. The latter was a member of the Leicester General Hospital Nurses’ League who qualified as a nurse in 1960 and she later donated her collection to the School. 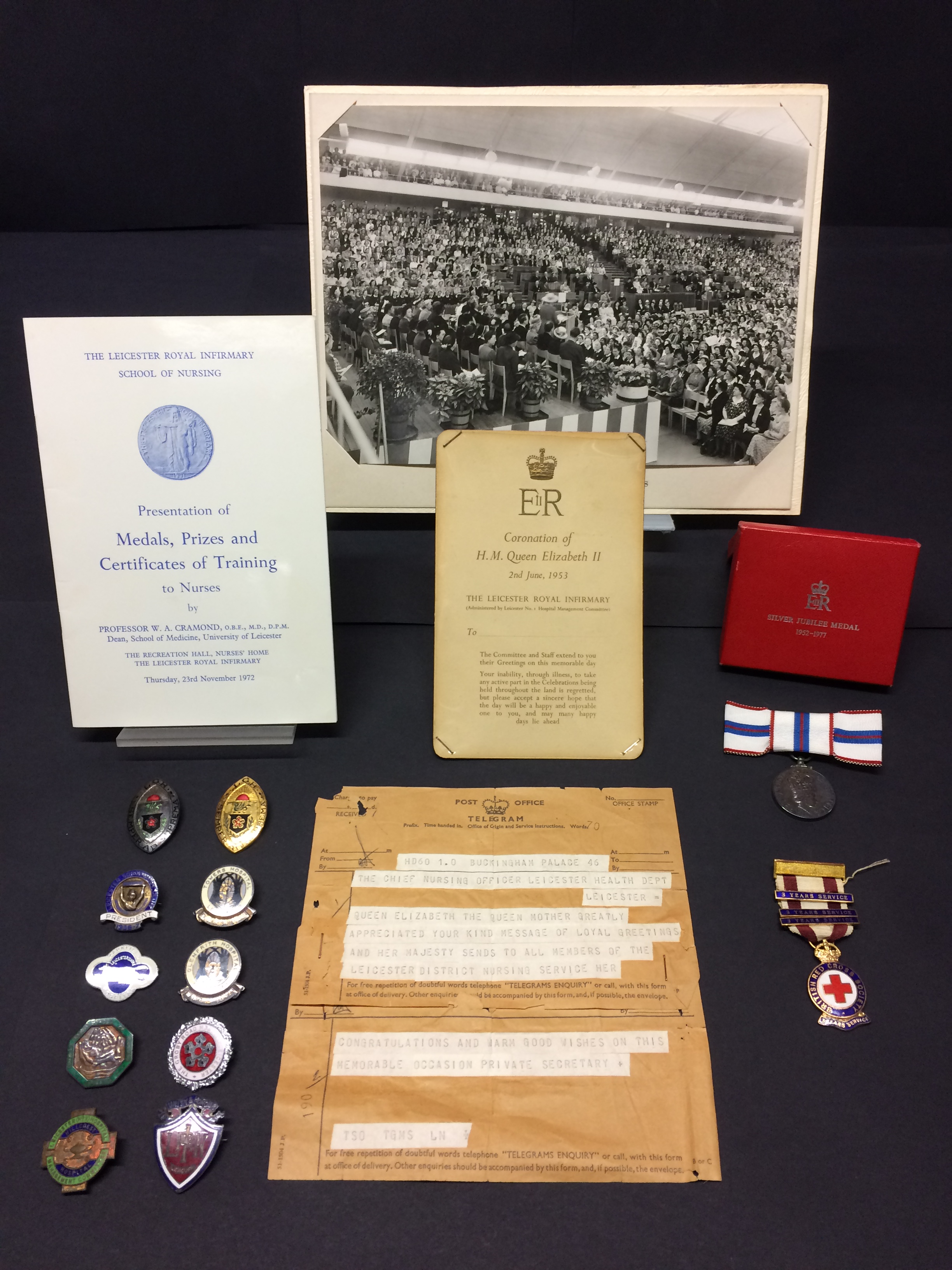 Showcasing the international work and achievements of the nursing profession, this display includes a photograph from the International Council of Nurses Conference, 1949, a programme for the award ceremony of medals, prizes and certificates given to nurses, 1972, a telegram from the Queen Mother sending her “congratulations and warm wishes” to the Leicester District Nurses Service, 1967, and a selection of medals and uniform badges (c 1920s – 1950s).

Leicester officially began training nurses at the Royal Infirmary in 1870 in association with the Institution for Trained Nurses and as the profession and training courses evolved, from 1903, nurses began to receive what should be considered essential tools for learning, such as access to a library, formal training and lectures, and good accommodation. In keeping with the theme for this year on sustainable development, long may these and other provisions continue. 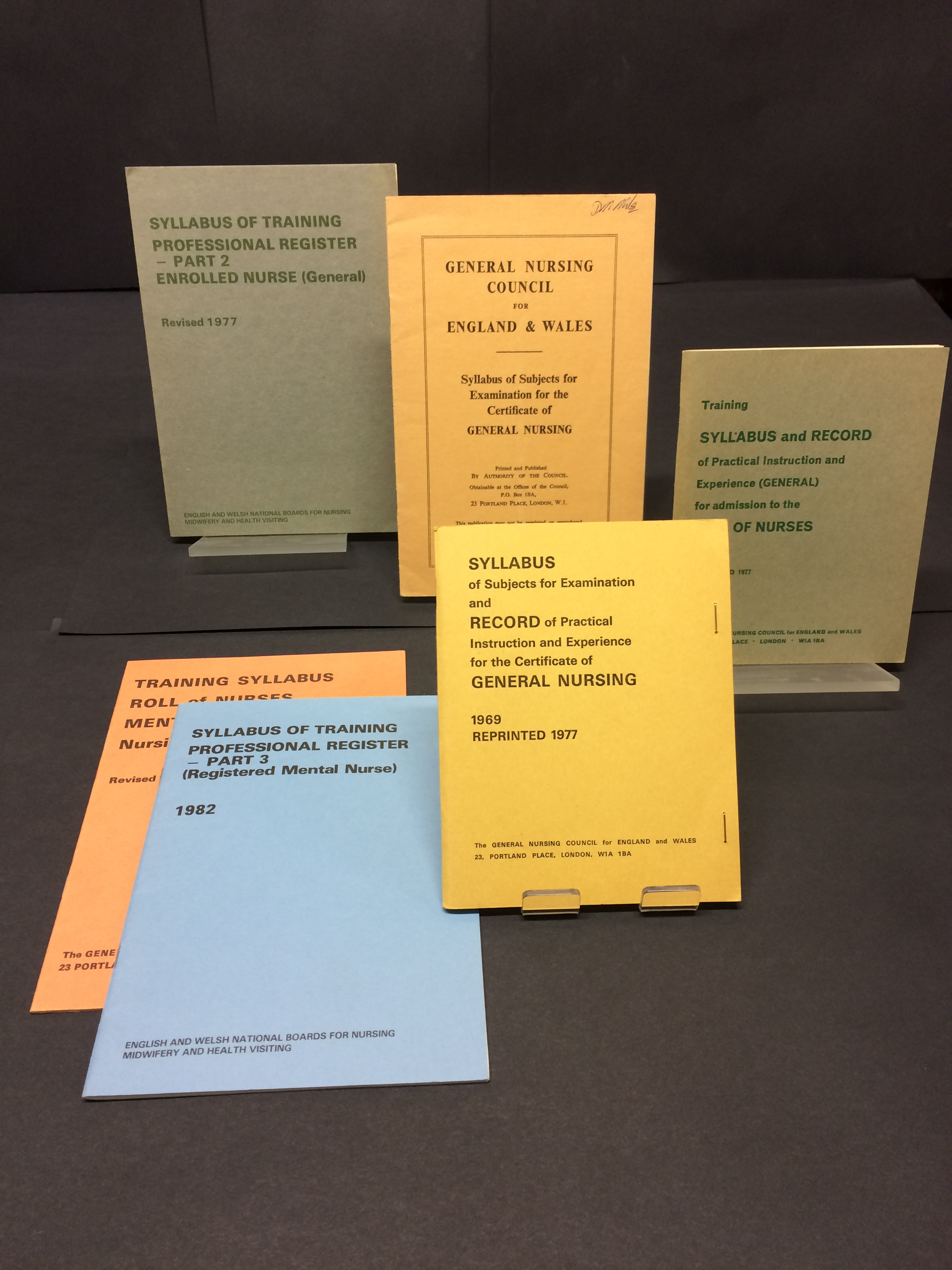 While there are a lot of course materials in the collection ranging from the 1900s to the present, this small sample shows the course booklets produced for nurses during the 1970s and 1980s.

Both collections include a diverse range of artefacts and papers, from course guides, syllabus booklets, and examination reports to photographs, medical equipment, certificates, and correspondence. Such materials provide a fascinating insight not only into the history of nursing but into the personal experiences of some of the nurses themselves. 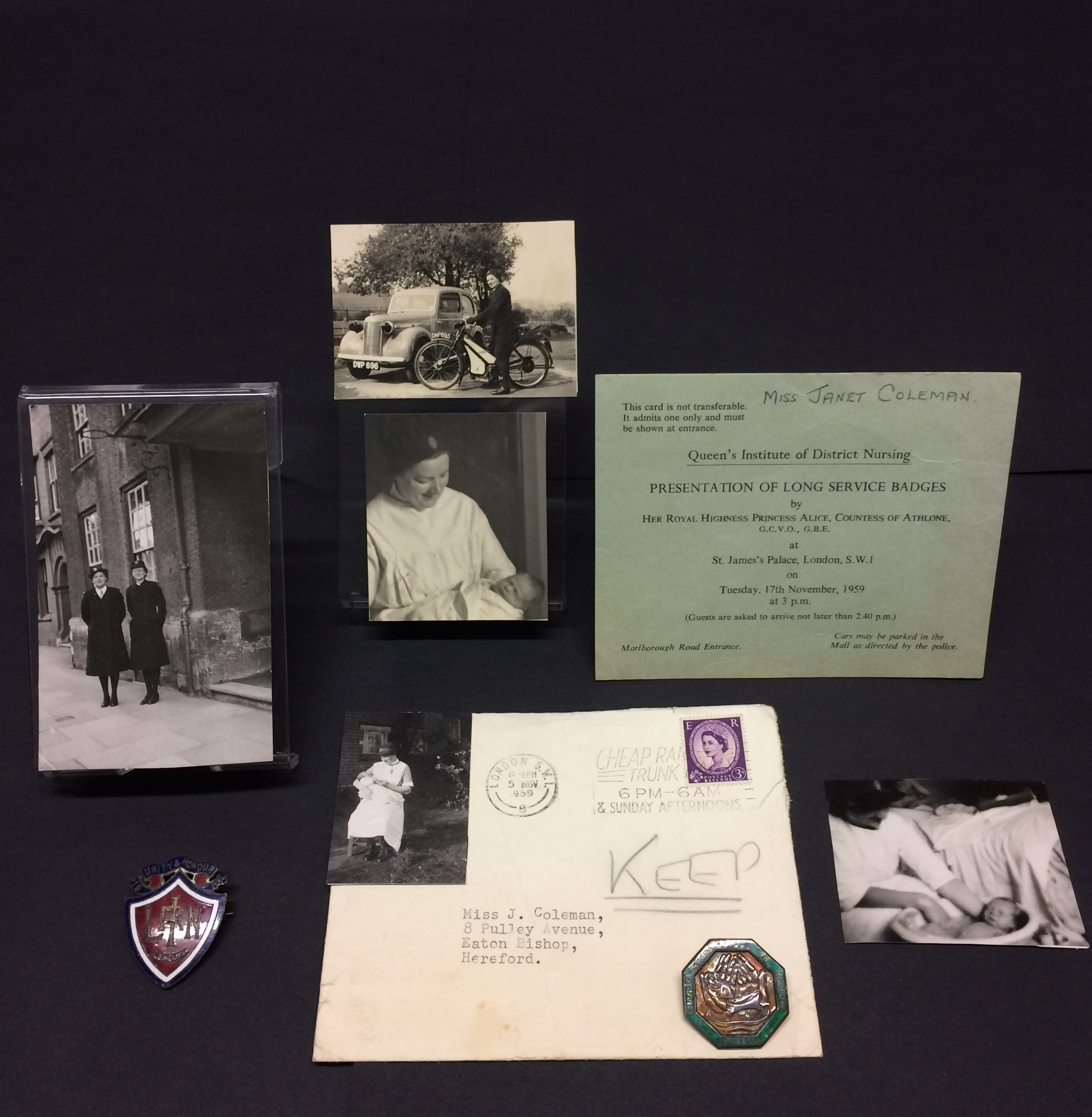 This small component of the collection focuses on Miss Janet Coleman who received a long service badge in 1959. Along with her invitation to the ceremony in London there are several photographs of her at work during the 1940s as a midwife.

A formal two-year nursing course was established in 1966 and the School itself relocated a number of times across the decades. One of the School’s most significant developments came when it merged with De Montfort University in 1995  to become the School of Nursing and Midwifery within the Faculty of Health and Life Sciences with training taking place at the Charles Frears Campus. 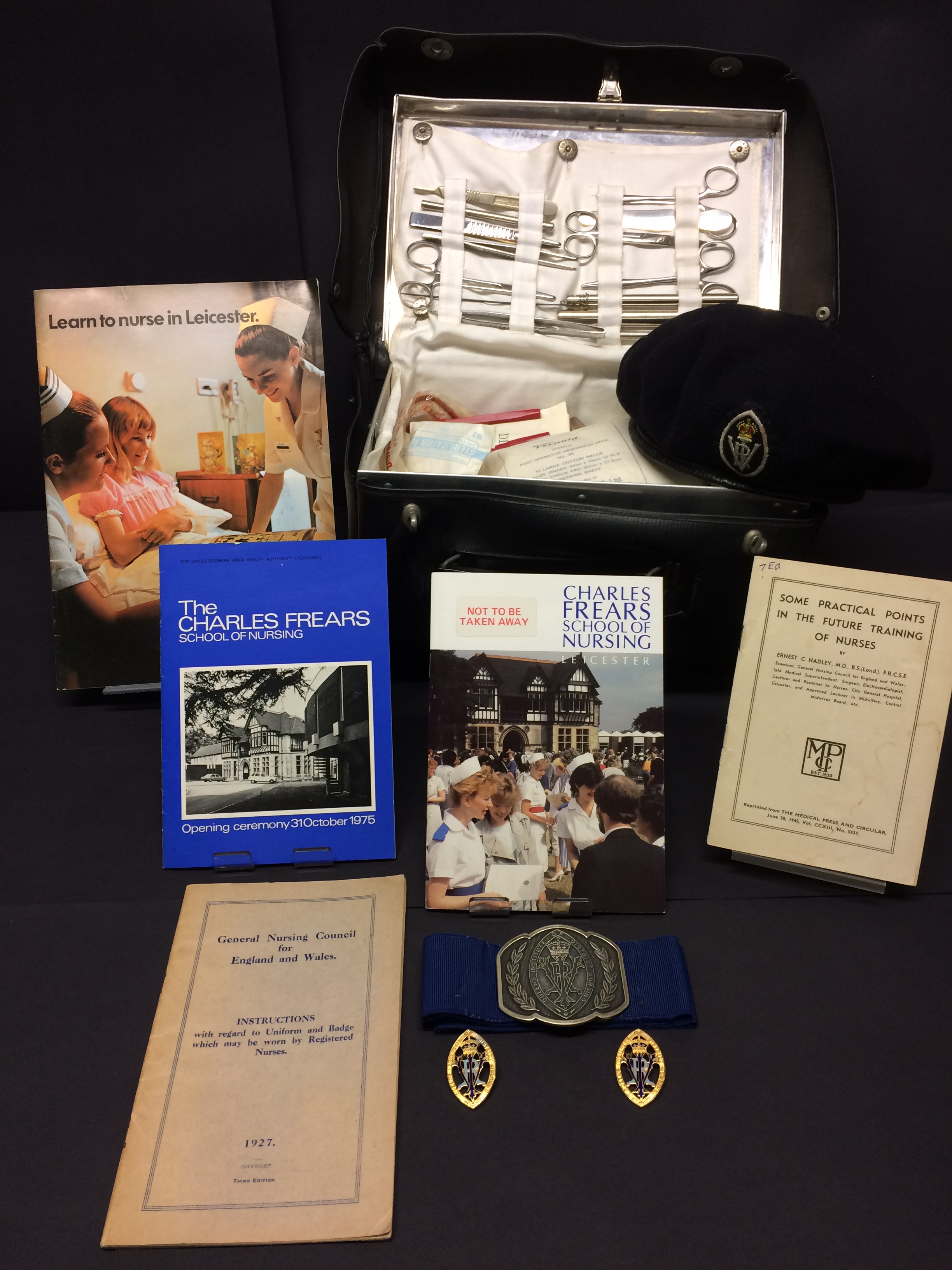 A selection of prospectuses, nursing equipment and uniform pieces, including a district nurses bag and a buckle and belt.

The Charles Frears campus was closed in 2011 and the School of Nursing and Midwifery is now based in Edith Murphy House providing classrooms, lecture theatre, ICT lab, meeting rooms and offices.

As well as wanting to show appreciation to all nurses past and present we also wish all our current nurses and midwives in training success in the upcoming exam period.