It’s the final day of the July 2016 DMU Graduations today and we hope you’ve all had a fabulous week celebrating. Today, graduands from the Faculty of Business and Law will receive their awards, and for our final post of ‘graduations of yore’ we thought we would remember all those who graduated from DMU when it had multiple sites across the midlands, including Bedford, Lincoln, and Milton Keynes – who knows, maybe your parent/guardians graduated from one of them!!! 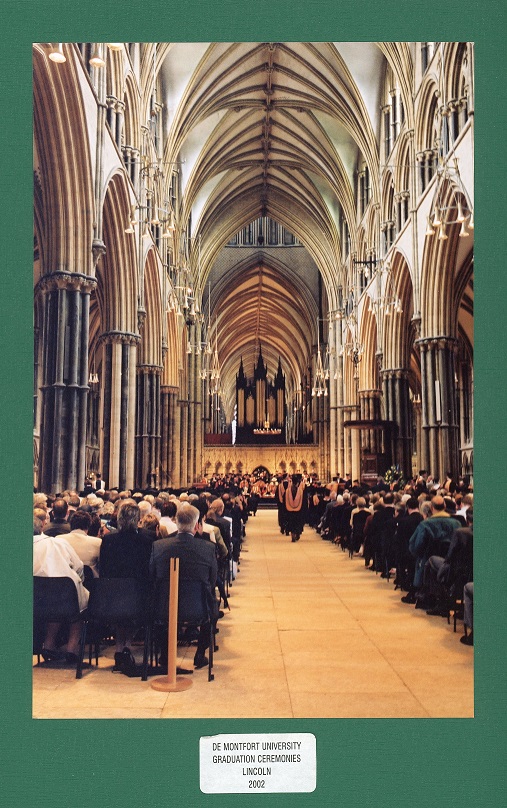 The image above shows the Lincoln ceremony for 2002 taking place in the city’s beautiful cathedral. 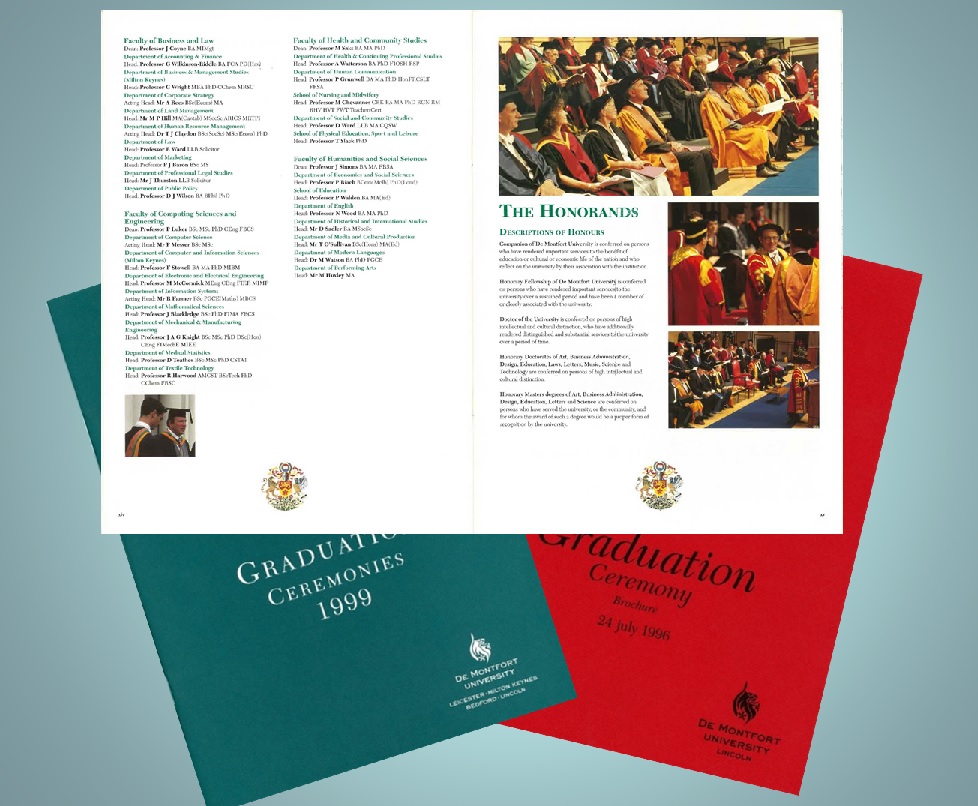 From left to right this image shows three brochures: the green 1999 brochure includes all graduations across DMU’s four campuses; the open page taken from the same brochure lists all graduates from the Faculty of Business and Law that year; and the red brochure from 1996 details the graduation ceremony taking place at the Lincoln Campus.

Over the course of the early noughties DMU would withdraw from these sites, focusing on the development and expansion of its main Leicester City Campus while enabling the respective sites to became the University of Lincoln in 2001, the Open University East Campus in Milton Keynes in 2003, and the University of Bedford in 2006.

So, back to our current DMU graduates – we hope you have all had a memorable graduation and we wish you all the best of luck in your next adventure. 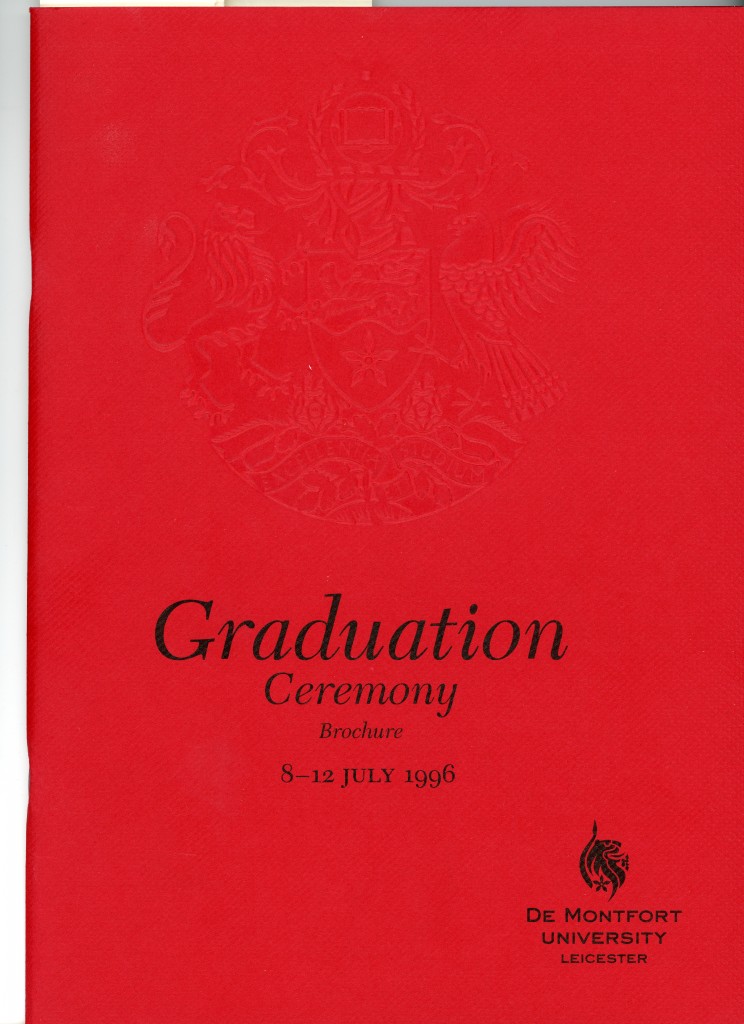 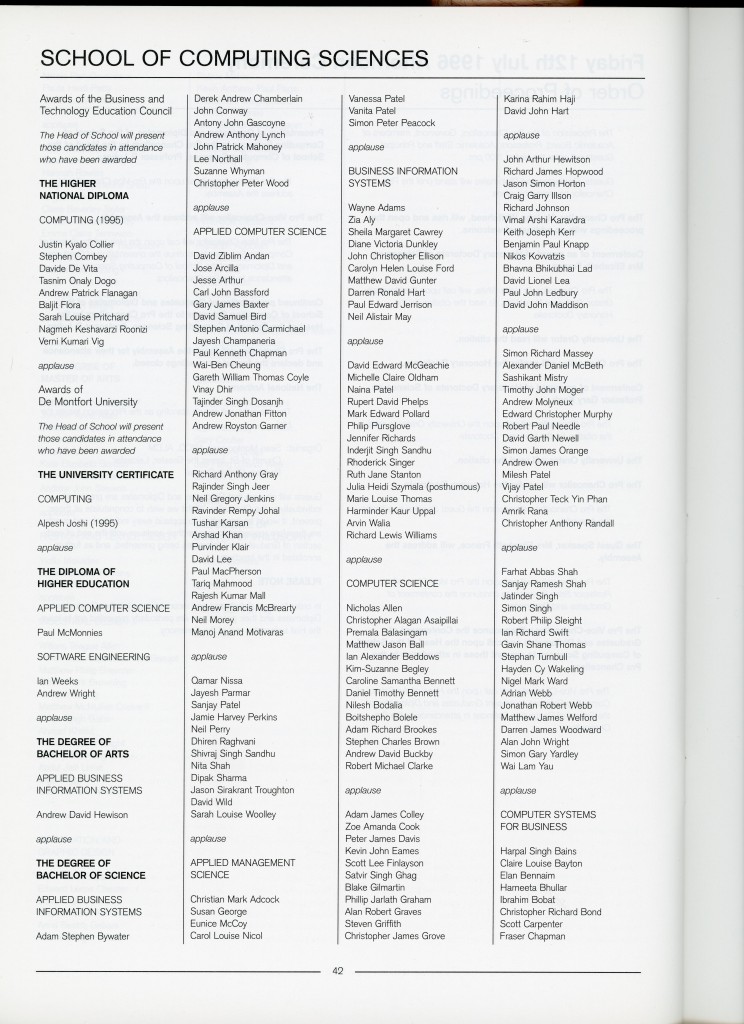 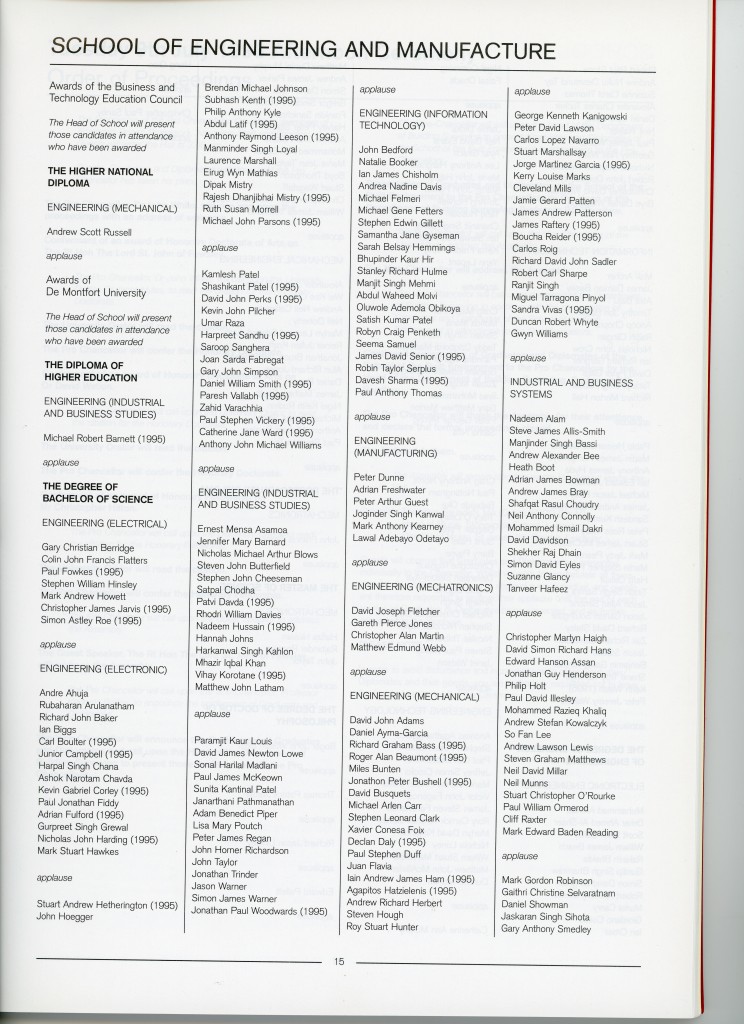 Graduations continue this week and what lucky students you are – fabulous sunshine for all your snapshots!!! But extremely hot in your ceremonial robes no doubt.

Today, graduates from the faculty of Arts, Design and Humanities will receive their awards (and what a special place that has in my heart having received all my awards from there myself) and so I thought it would be nice to share some images of previous ceremonies. While we have copies of graduation brochures dating back to 1968 our photograph collection of award ceremonies starts a bit later, with our first pics dated 1992. 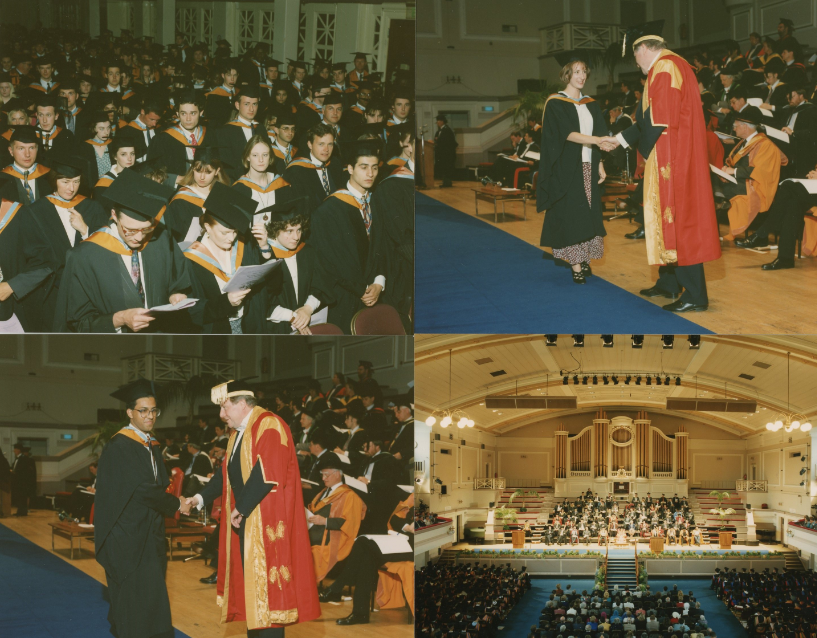 Graduation Ceremony 1992: The expectant graduands fidget in their seats in the first image before the awards ceremony takes place, and we can see two students receive their awards in the following two images. The final photo captures the ceremonial tradition of the event which, in 1992, was held at De Montfort Hall. 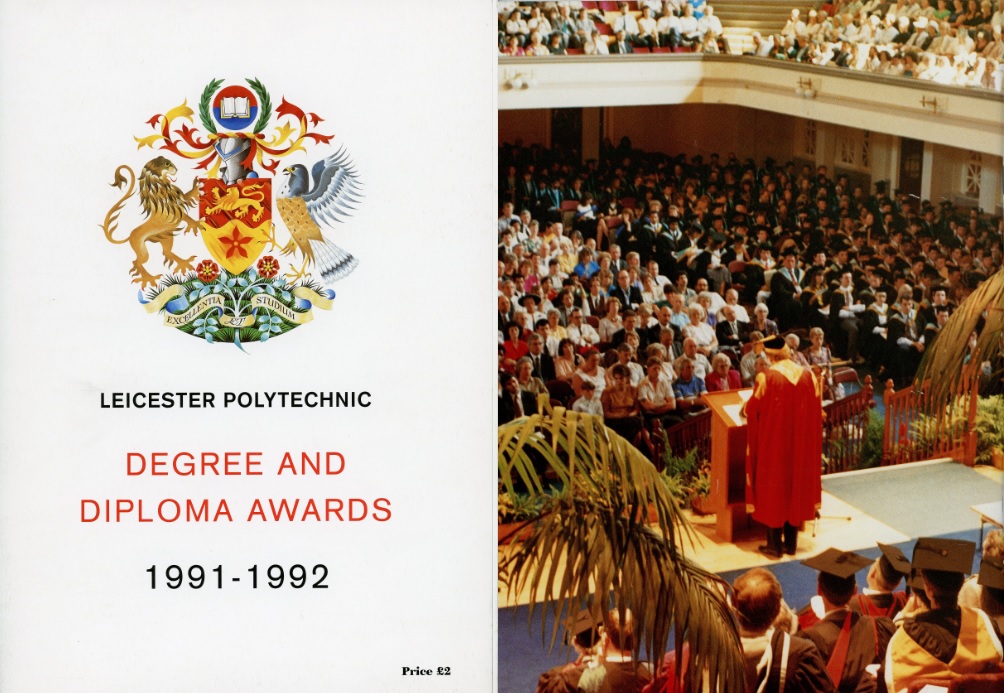 Graduation Brochure 1991/92: The front and back cover of the brochure 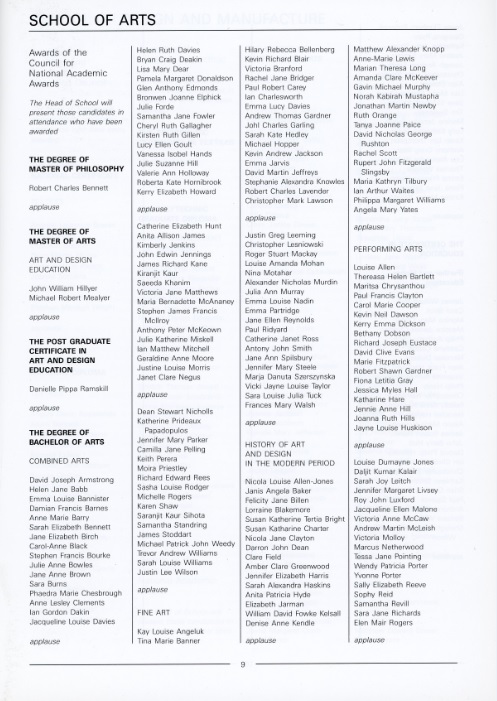 A page from the above brochure showing the list of students graduating from the School of Arts.

Wishing you all a wonderful day; happy graduating from Natalie and Steven

Graduations start this week on Saturday 16th July, and to celebrate this wonderful time for DMU’s staff and students we thought we’d commence a series of graduation blog posts, beginning with one of our most courageous and inspiring honorary graduates, Nelson Mandela. 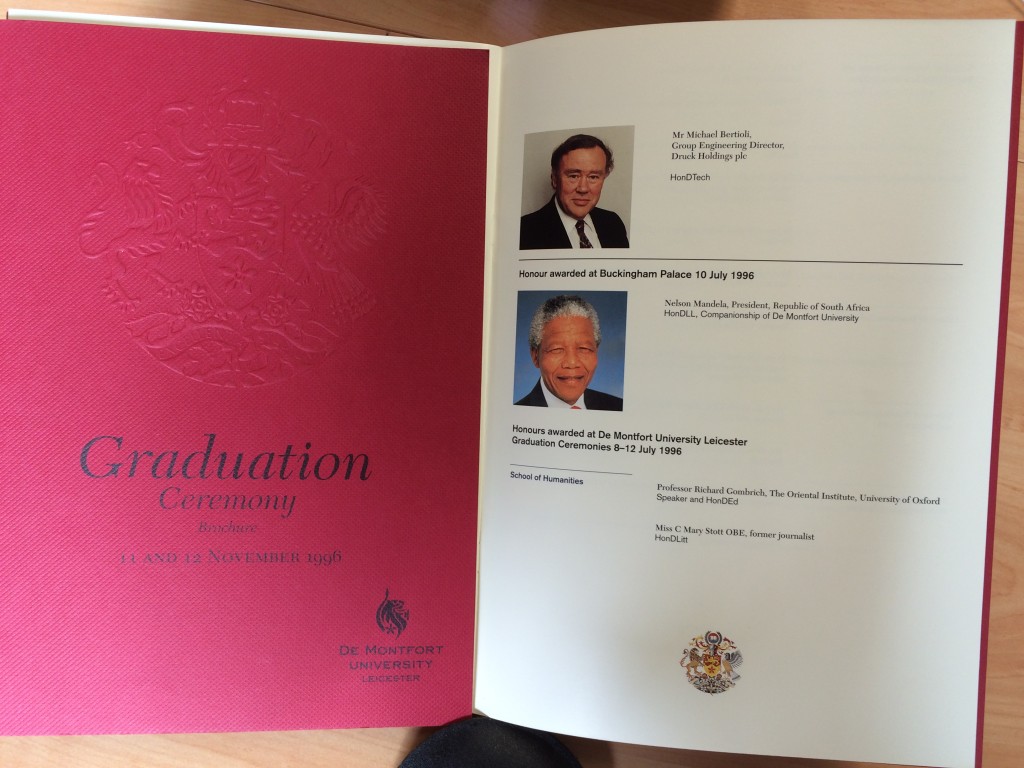 Mandela was valued for his bravery and wisdom in bringing people together to live in peace. De Montfort University recognised Mandela’s efforts in promoting equality, a core principle held by the University. 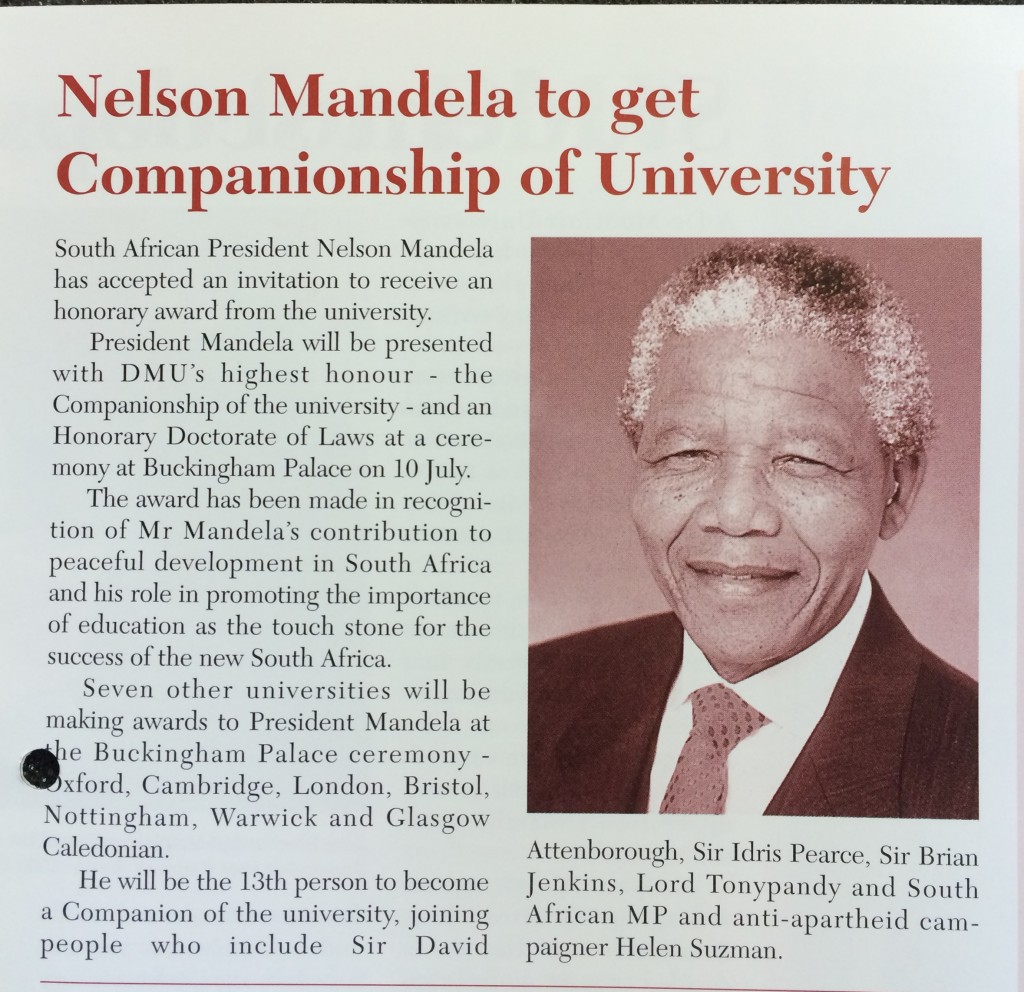 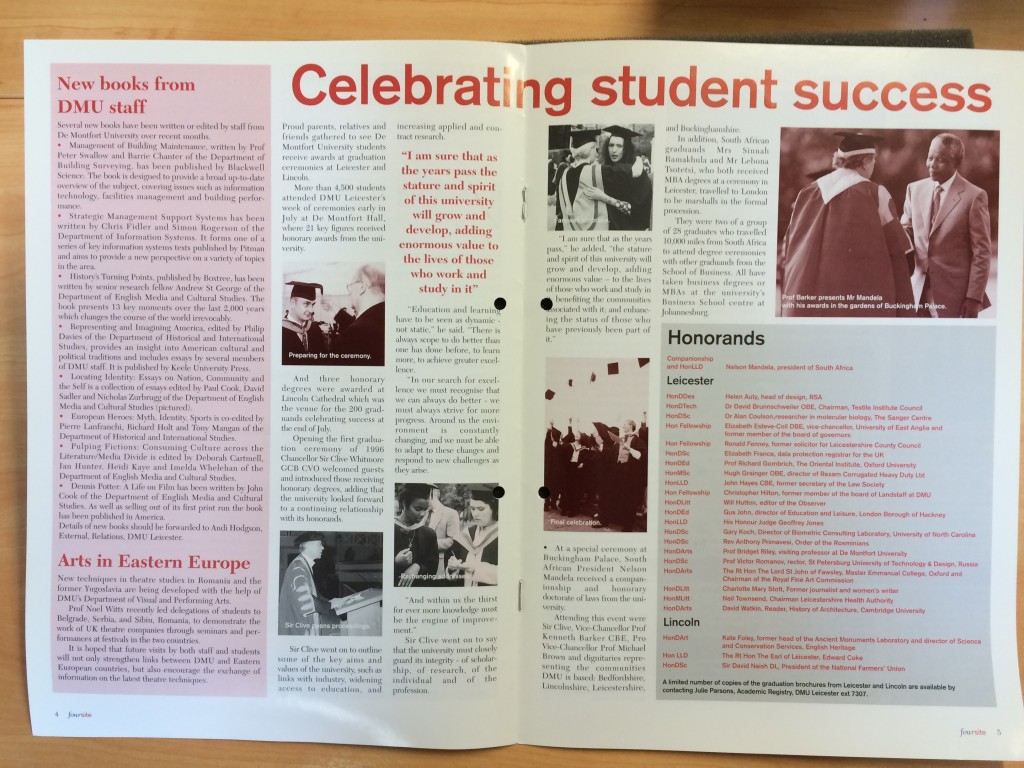 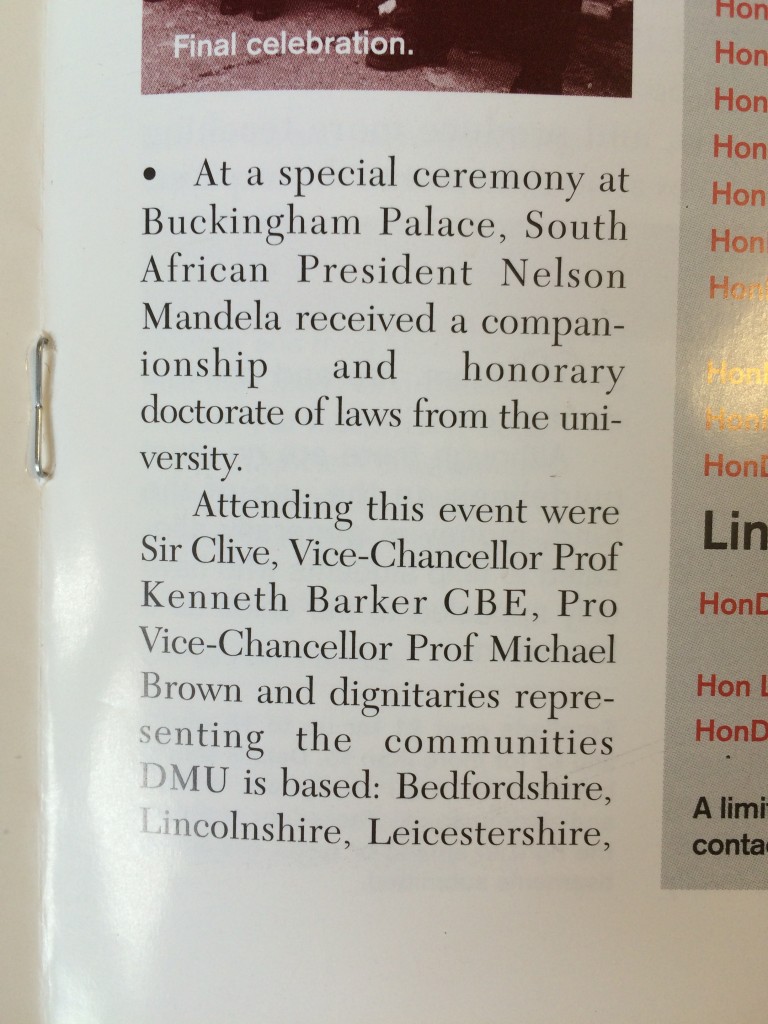 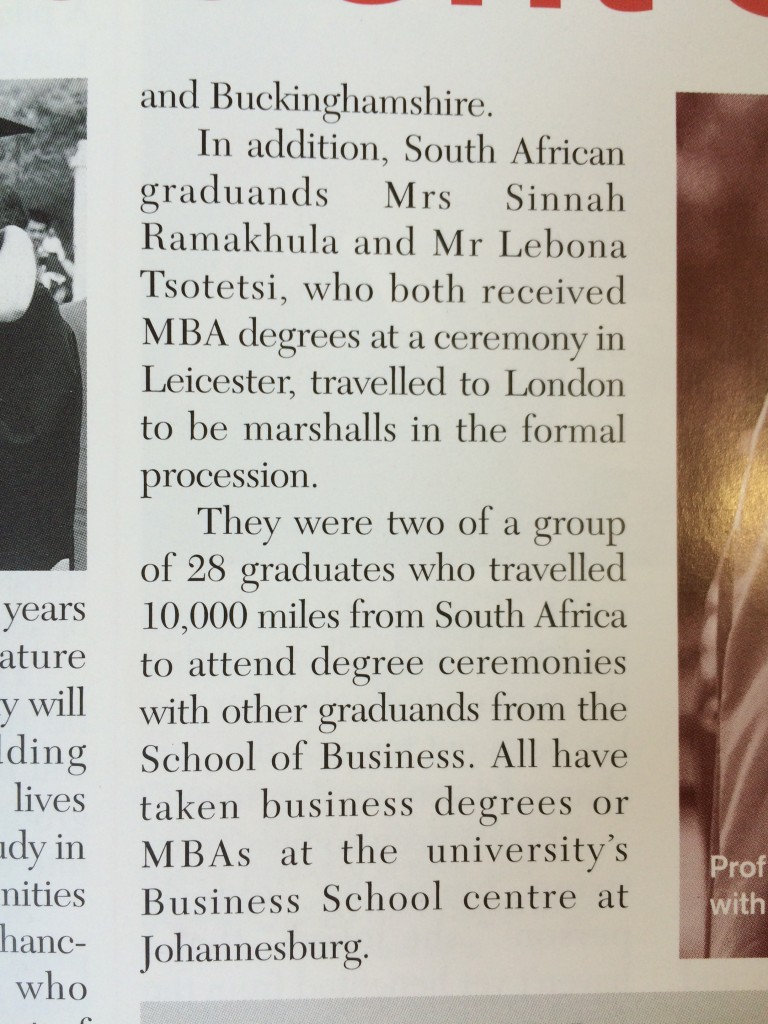 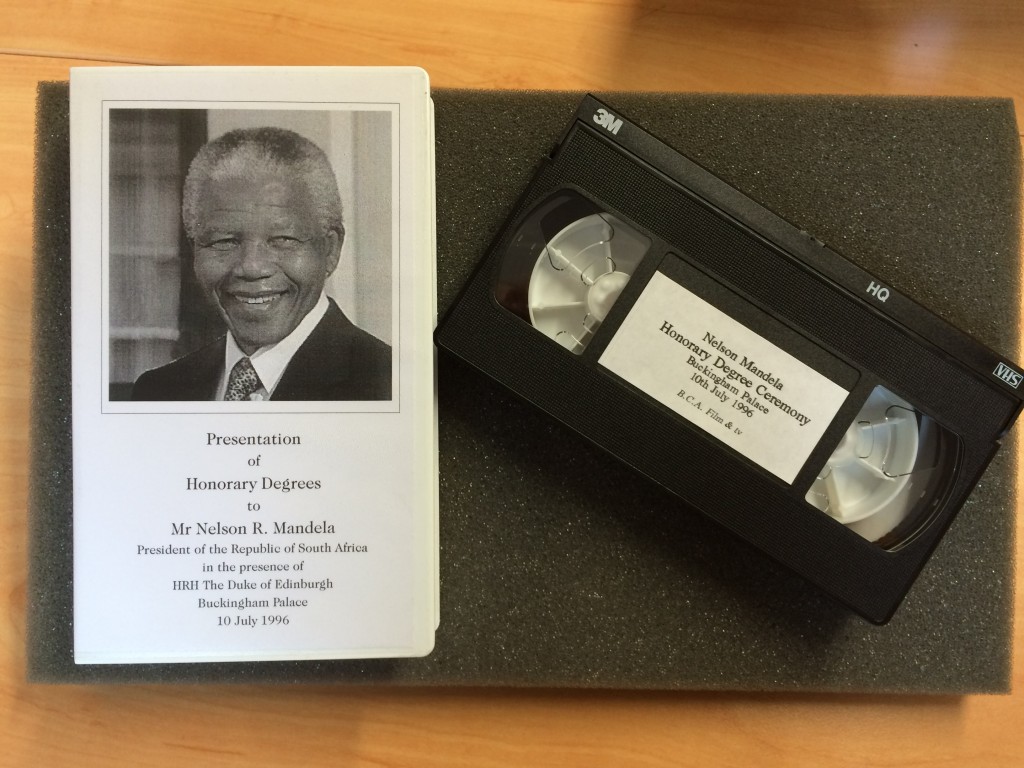 VHS tape of Nelson Mandela’s Presentation of Honorary Degrees. For the younger blog visitor, a VHS is similar to a DVD but way cooler!

More posts to follow across the week, but in the meantime…

from Natalie Hayton and Stephen Peachey