New Catalogues on the Archives Hub 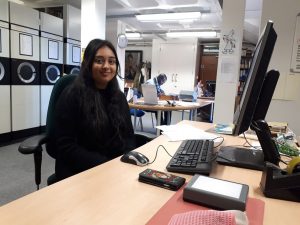 Thanks to the efforts of our Graduate Champion, Gursharan, we have several more new catalogues available on the Archives Hub. Here’s a round up – remember all of these collections are available for anyone to view in our reading room in Kimberlin Library.

A05: Engravings after Raphael 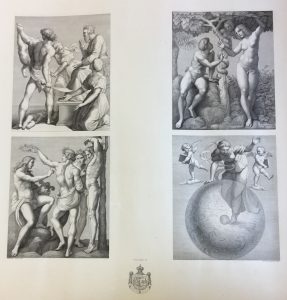 Artist Jon Adams was commissioned by the 2015 Parliament Anniversaries Programme to create works that celebrate constitutional history, in particular the 800th anniversary of the Magna Carta. Adams created the ‘Democracy Street’ app which allows people to explore the history of the parliamentarians commemorated in street names. Adams held talks and exhibitions at De Montfort University in 2016, showcasing his ‘Democracy Street’ artwork. This collection comprises 8 postcards with different abstract art designs, inspired by different streets including Wilberforce Road, Shaftesbury Avenue and De Montfort Street.

Reproductions of Soviet propaganda posters and posters for theatrical performances.

Brochure produced as a way to appeal for funds in order to provide for equipment in the 1925-27 extension of the Hawthorn Building. Contains statistics for enrolment and attendance at Leicester Colleges of Art and Technology from the years of 1911-26. Also contains a brief history on the colleges, as well as the links they had to many of Leicester’s manufacturing industries. The front cover contains the archway entrance of Hawthorn, with the title, ‘The Gate of Opportunity’.

Frank Watson studied engineering at the Leicester Municipal Technical and Art School. He was required to design a toasting fork as part of the course. His design is meant to make it easier to toast bread on both sides by including a ‘flipping’ mechanism rather than having to manually turn the bread. 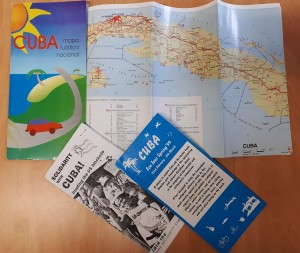 Between 22nd February and 8th March 1997, De Montfort University and the Henry Doubleday Research Association visited Havana, Cuba. Henry Doubleday Research Association is an UK charity dedicated to research and promoting of organic, farming and food. It is now known as Garden Organic. This trip was designed to obtain an understanding of the organic horticulture in Cuba. The trip included informal talks at the Ministry Of Agriculture, a visit to the National Institute for Investigation into Tropical Agriculture, and visits to tobacco plantations.

The collection comprised the papers of Mr and Mrs Owens, members of Henry Doubleday Research Association, relating to the trip, including a typed diary of the visit and correspondence from people they had met on the trip, background notes on Cuba, prepared by Dr George Lambie, lecturer at De Montfort University, photo albums, videos of the trip, and leaflets and books in Spanish about agriculture.

D/072: Ephemera from the Montreal Expo

The 1967 International and Universal Exposition, held in Montreal, Canada, was a world fair in which nations showcased their achievements. The theme for 1967 was ‘Man and his World’. It appears that a delegation or staff member from Leicester Colleges of Art and Technology (now De Montfort University) attended the fair, bringing back newspaper cuttings, periodical journals, photographs and handouts from the Expo.

Detailed maps of Leicester city centre and surrounding areas, produced by the Goad company to show insurance risks. One set of maps are largely focussed around factories in the city. Many of these maps were revised in the 1960s to include information on shops. The second set of maps are from 1995 and show shopping centres in the following areas of Leicestershire: Ashby De La Zouch, Coalville, Hinckley, Leicester, Loughborough, Lutterworth, Melton Mowbray, Oadby, Oakham, Wigston.

Application for reconstruction of Holy Cross Priory, Leicester, 1947, including information on the planning of development and sketches of what the building could look like post reconstruction. Also contains ground plans.

St Nicholas Church, situated on Holy Bones beside Jewry Wall, is an Anglican Parish Church, and is considered the oldest place of worship in Leicester. The Church was partly built out of Roman material taken from ruins, while other sections are Norman. It was extensively renovated in the 1870s. This leaflet was produced at the request of the Vicar and wardens as a guide for visitors to the church, c.1936. 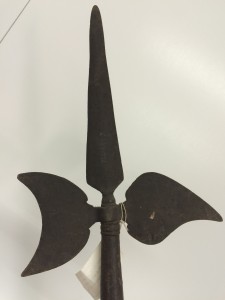 Poster for exhibition dedicated to the work of Walker Evens. Evens was an American photographer, known for his photographs of America during the great depression. The poster features the photograph ‘Roadside stand near Birmingham, Alabama’ 1936 by Walker Evens. Image of a road side shop in Alabama. The shop is covered with advertisements for fish and watermelons are placed outside the shop.

The second poster was for the ‘Blacks in America; A Photographic Record’ exhibition. This exhibition was based on Robert A. Mayer’s book, Blacks in America; A Photographic Record . Mayer was a director of the George Eastman Museum and the President of the Museum Association of New York. Images were taken by Gordon Parks, American photographer who was known for his photographic essays in Life Magazine. The poster features the photograph ‘Pittsburgh Grease plant March 1944′ by Gordon Parks.

One compact Prado 150 projector with slide changer or film strip holder. It has a 150w lamp for cine fitting and a rotating front lens. C. 1953-1967

Nineteenth century photographs of buildings from various European countries. These include a large collection from Italy and Greece, and a few from France, Germany and the UK. There is one image from the USA. The photographs focus on Classical, Renaissance and Neo-Classical styles.

The Symington Collection owned by Leicestershire Museums Service comprises corsets and foundation-wear created by the Market Harborough company R and W.H Symington. The collection tells the story of the Symington company, and provides insight into the development of corsetry, foundation garments and swimwear. In 1981 the museums held an exhibition of items from the collection, this poster for exhibition ‘Foundation of Fashion’ featuring a painting of three women in corsets and information about the exhibition such as opening times.