New cataloguing on the Archives Hub

The following new catalogues have been added to the Archives Hub:

Photograph album compiled by Thomas Scott Elgood, 1880-1912, showing examples of European metal work. Elgood (1845 – 1912), along with his brothers Richard and John, Thomas was senior partner in a firm of art metal workers known as Elgood Brothers, based in Upper Brown Street, Leicester. Between 1882 and 1900 Thomas Elgood also worked as an instructor in Engineering subjects at the Leicester Technical School. As well as his teaching duties, Thomas attended the Leicester School of Art to take classes in drawing (1891) and modelling (1892). Together with his brother, noted landscape artist George Elgood, George’s tutor Wilmot Pilsbury, and their brother in law artist John Fulleylove (married to Elizabeth Elgood), Thomas used to travel around Leicestershire making topographical drawings and campaigning for the preservation of local heritage.

Notebooks containing lecture notes, sketches, plans and doodles made by Dennis Berry during his time on the Diploma in Architecture at Leicester College of Art, 1947-1950. The notebooks include loose exam papers, homework questions and circulars.

Above: doodle from the notebooks of Dennis Berry

Set of four prints by Peter Gauld, 1970, showing Ely Cathedral, York Minster, Canterbury Cathedral and Lincoln Cathedral. Gauld was born in 1925 in Coalville, Leicestershire. He attended Loughborough College before serving with the Manchester Regiment during World War Two. After the War he attended Leicester College of Art to study painting and graphic design.

F/004: Fashion Designs by A Posner 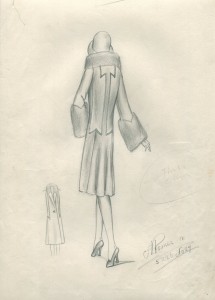 Above: fashion design by Posner

Sample book of a silk merchant from Lyons, France, 1837. The book contains 71 examples of fabric sold by the merchant.

A collection of sheet music title pages, 1850-1860, most likely collected as examples of lithography, illustration, printing and design for the Printing Trades course at Leicester School of Art and Crafts. 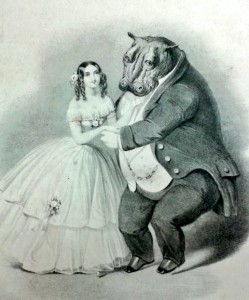 Above: detail of title page of the Hippopotamus Polka

1 Response to New cataloguing on the Archives Hub