This pop up exhibition was held in January 2016 to coincide with the investiture of the new DMU Chancellor, Baroness Doreen Lawrence. 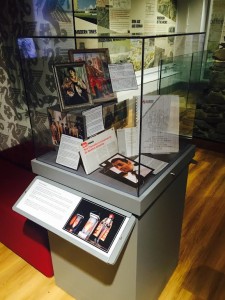 What is a Chancellor?

A Chancellor is a nominated leader and ceremonial head of a university.

The Chancellor has an important ambassadorial role, working with colleagues to represent the institution in the external community. He/she is an advocate of the university working to raise the university’s profile and advance its interests nationally and internationally.

The role of Chancellor is an honorary one, but has great importance and significance; as such the Chancellor needs to share the value and ethos of the university, enhancing the reputation and encouraging their mission.

At DMU the Chancellor is also a member of the Board of Governors and works closely with the Senior Executive Board in developing the strategic direction of the institution and overseeing its financial health. 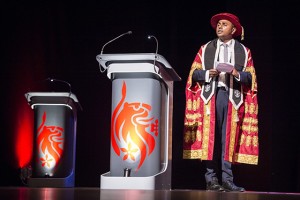 The Role of Chancellor at DMU

When Leicester Polytechnic became De Montfort University in June 1992, it was decided that the institution would apply ‘the language of the profession, nationally and internationally, to the roles of the senior staff.’

The Polytechnic was historically managed by a Director and the Board of Governors. However, the new university followed the common practice of many other universities by establishing a management structure of Chancellor, Vice-Chancellor, Pro-Chancellors, Pro-Vice Chancellors and the Chief Executive. Continuity was maintained by keeping the personnel in similar roles.

From 2016: Baroness Lawrence of Clarendon OBE 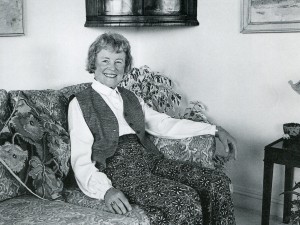 Dame Anne was born in Bombay to a German businessman father and English mother who had met and married in India. After the onset of the Second World War, Anne’s and her mother returned to England.

A scholarship took her to Somerville College, Oxford, where she read philosophy, politics and economics, then entered the Civil Service in 1953. She held many senior appointments and was considered the most successful woman civil servant of her generation.

She retired in 1990. Dame Anne devoted a great deal of her time to higher education, in which she was passionately interested, and was appointed as an independent governor of Leicester Polytechnic in 1988. In June 1991 she became the first Chancellor of the new De Montfort University. Dame Anne died in 2000, aged 69, of Parkinson’s disease. In an obituary in the DMU Newsletter, VC Philip Tasker described her as ‘a remarkable, wonderful woman’ whose contribution was ‘pivotal in the university’s success in the early, challenging years following its incorporation.’ 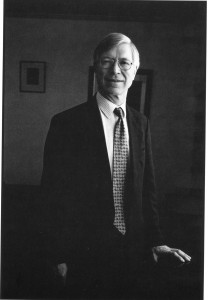 He retired in 1994. In 1992 he worked as a visiting professor of Public Policy and Managerial Studies at DMU. In March 1993 he became an independent member of the governing body and was invited to become Chancellor in 1995. 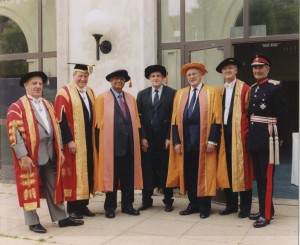 John White attended Magnus Grammar School in Newark before gaining a management apprenticeship at Boots in Nottingham. While working there he undertook a part time HNC in Business Studies.

He then attended Nottingham University to gain a BA in Industrial Economics in 1966. After graduation he joined Staveley Industries, looking at the application of modern marketing to the machine tool industry. John went on to undertake a PhD on this subject at UMIST.

Over the next twenty years he progressed through a series of appointments in major manufacturing companies, culminating in his appointment as Chief Executive of BBA Group. Despite the demands of his career John took time to teach, both at UMIST and at Leicester Polytechnic.

In 1989 he joined the new Board of Governors of Leicester Polytechnic Higher Education Corporation and became the Chair of Governors, successfully helping to steer the institution through a difficult transitional phase. In 1998 he accepted the role of Chancellor and was also awarded an Honorary Doctorate of the University. 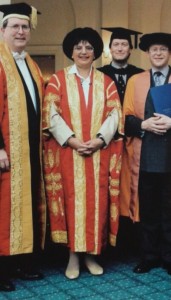 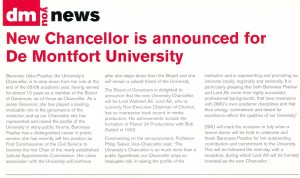 Baroness Prashar was born in 1948 in Kenya before moving to Yorkshire with her family in the 1960s.

She read Politics at Leeds University and Social Administration at the University of Glasgow. Since the 1970s she has served a variety of public and private sector organisations, including the Runnymede Trust, Policy Studies Institute, National Council for Voluntary Organisations, Parole Board of England and Wales, and the National Literacy Trust.

She became a Governor of DMU in 1996 before taking the position of Chancellor. Vice-Chancellor Philip Tasker described her as an exceptional Chancellor who brought a wealth of experience from her long and distinguished career in public service to the university. 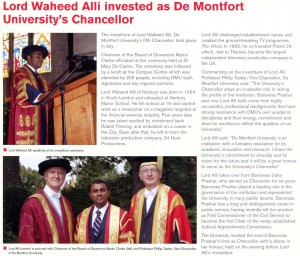 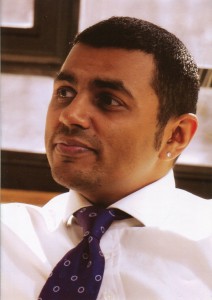 Lord Alli was born in 1964 in London and attended Norbury Manor School.  He left school at 16 and became a researcher on a financial services industry magazine. He was later talent spotted by an investment bank and began a career in the City. He left this role to form the television production company 24 Hour Productions, which produced the ground breaking TV programme The Word. In 1992 he co-founded Planet 24 which became the largest independent television production company in the UK; as Managing Director Waheed was responsible for programmes including The Big Breakfast.

Waheed was always interested in politics and has taken on varied public duties including serving on the Executive of the British Youth Council, the Teaching Training Agency and the Creative Industries Taskforce. He is a trustee of the Elton John Aids Foundation and Vice President of UNICEF and joined the Labour Party aged 20. He worked on Tony Blair’s leadership campaign and election campaign and was made a life peer of the Labour party at 34. Since then his work has been focused around gay rights, youth and education.

On his appointment as Chancellor he praised DMU’s commitment to diversity and the way that it fosters creativity and radical, innovative approaches. 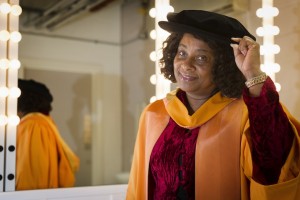 Doreen Lawrence was awarded the OBE for services to community relations in 2013 and since then she has been made a life peer in the House of Lords.

She has won praise for her tireless dedication to community, anti-racism and other causes close to her heart and she was recently named the most powerful woman in the country by the BBC. Her spirit and resilience and demand for a better way have genuinely impacted the core of British life.