As I’ve mentioned before, the Ski Club of Great Britain collection is very varied, comprising not only the administrative record of the organisation but also photographs, skiing equipment, competition awards, a library and a film collection dating from the 1930s to the 1970s. 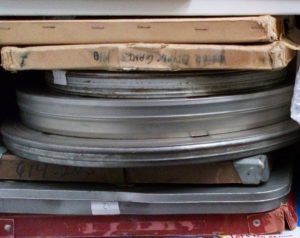 There are about 90 film reels in the collection. When the Ski Club collection came to DMU Special Collections a list was made, but there is significant information missing from it. Not having the equipment to show the films ourselves, we had to rely on what was physically written on the film reel or tin for a clue as to its contents. We found that some films had no title at all, some films had titles which had been crossed out and replaced with a new title, several films had the same title and very few had dates. Without watching the films it is impossible to tell if the films with the same titles are duplicates, what the contents of the untitled films might be, and what their age is.

We realised we needed specialist help. 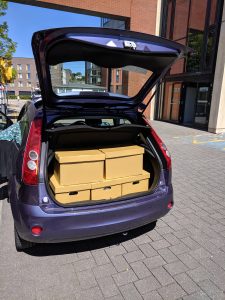 he Media Archive of Central England (MACE) is the specialist public film archive for the East and West Midlands, an independent company and registered charity based at the University of Lincoln. MACE has the equipment and, most importantly, the expertise to carry out an assessment of the Ski Club films and provide us with the vital information that we are missing. Not only that, casting an expert eye over the films will enable MACE to report on their condition, give us guidance regarding their future storage, and identify film gauges and formats.

So last month Katharine and I took a trip to Lincoln to deliver the films to MACE.

We were lucky enough to be given a tour around the facility and were very impressed! We saw our films safely into the very cold specialist storage room with its banks of roller racking… 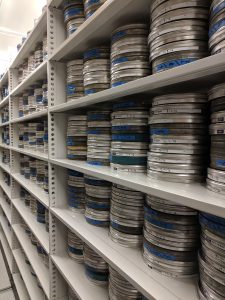 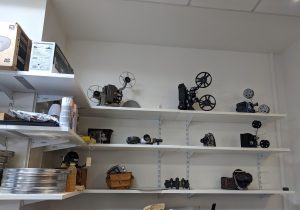 …and then gazed in wonder at the collection of historic film recording and playing equipment on display in the reading room.

We met the members of the MACE team who will be working on the Ski Club films and listened with increasing perplexity and admiration as they explained the work they proposed to do on the collection with equipment like this: 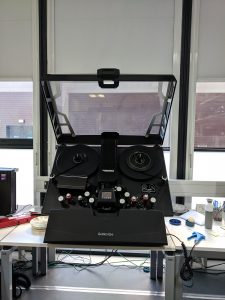 Understanding all of the individual words but little of the overall meaning of the explanation, Katharine and I were impressed with the specialist technical knowledge of the staff, which only confirmed our belief that this was definitely not something we could have attempted ourselves.

One thing we did understand was a comment that white is a tricky colour to work with, meaning that a collection of skiing films presents a real (reel) challenge of technical skill!

We look forward to seeing the results.