A Business student in the Archives…

As part of my Sports Heritage and Legacy Management module of my masters programme, I was tasked with producing a detailed look into the history of the Ski Club of Great Britain between 1903 and 1933 [see the post below for Alex’s assignment]. As the internet was several decades away from being invented, I required a different source of information for which to write our assignment from, and this came in the form of the DMU Archives and Special Collections.

Having come from a Business background with no experience of working with archival material before, I was unsure of what to expect and how I was going to turn 70 year old books into an acceptable piece of post-graduate work, however the staff in the Archives made it a very easy and pleasant experience. Katharine and her team were always on hand to assist us when looking at the material, and this included showing me how to handle both books and images to ensure the quality wasn’t compromised, whilst also helping me to find books relating to my allocated years amongst the thousands of books in the Archives. Our class also received a dedicated two hour workshop on how to use archival photography and images, which saw us look at a number of interesting objects including old negative SCGB images and photo albums relating to our assignment. This workshop also showed us how to caption pictures and images correctly, which was vital when it came to our assignment. 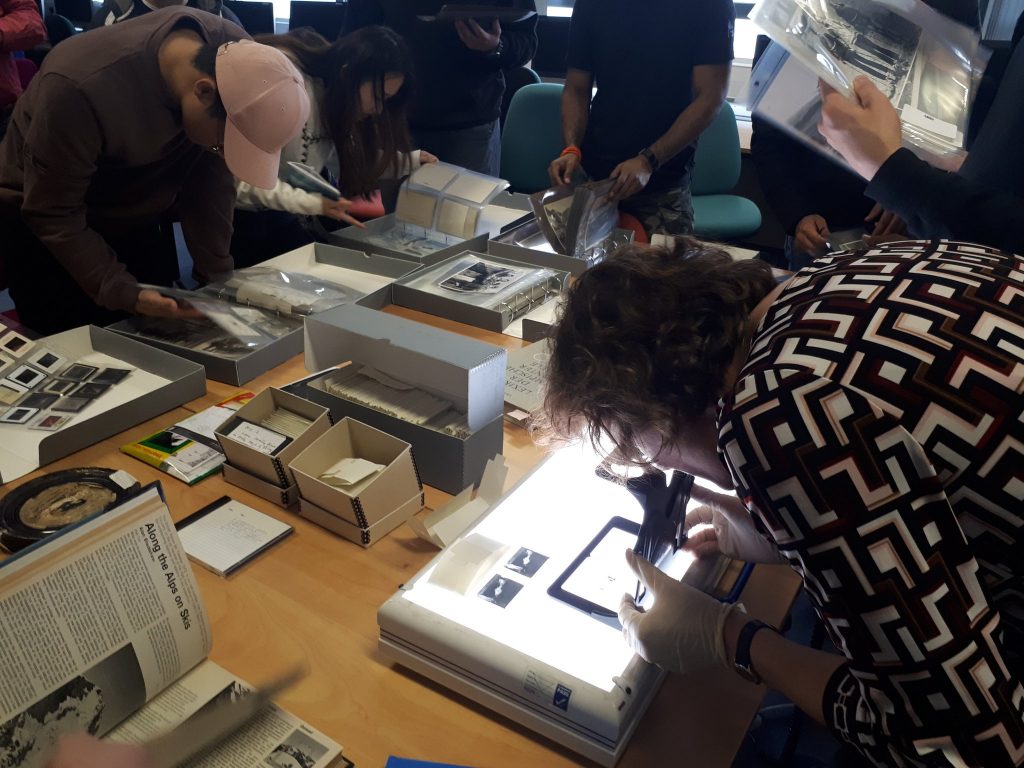 Overall, my experience of working with DMU Archives and Special Collections was an enjoyable one, and I was impressed by the vast array of books and wide range of objects. The staff were extremely knowledgeable and helped me towards achieving a good grade in my assignment, and I would encourage all students to go and take a look at what the Archives has to offer.

A number of Business Management in Sport MSc students from Leicester Castle Business School have recently used the Ski Club of Great Britain collection as part of their Sports Heritage and Legacy Management module. The students were tasked with preparing a brief history of two years of the Club’s operation, using archive materials such as committee minutes, year books and photographs. Below is the history of the years 1933-34, by Alex Marlow:

1933 was an important year in the history of the Ski Club of Great Britain, as the club faced an uphill struggle to finance their operations as the country tried to recover from the Great Depression of 1929.

Despite the majority of Ski Club members being affluent members of society who were likely to be less affected by the Great Depression than the rest of the country, the Ski Club decided to seek additional revenue streams in order to solidify and improve their financial position. In light of this, the club published a ski guide, titled ‘Guide to Valais and The Haute Savoie’, which generated revenue of £75 for the club (as shown in the picture below), an extremely welcome windfall, with that sum being worth almost £5,000 in 2018 terms[i].

Alongside generating revenue through publication, the ski-club sought ways in which to generate revenue in the off-season where snowfall was minimal, such as holding dry-skiing classes. In the club’s AGM of 1933, club president Sir Claud Schuster (pictured below) noted that the debut of the dry-skiing classes in Autumn 1932 were extremely successful, returning £138 in class entrance fees[ii], and encouraged the council to organise further classes for Autumn 1933. 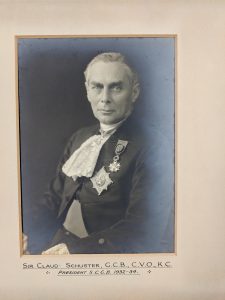 The July 1933 AGM also saw a change to longstanding Ski Club terminology. The council recommended that the word ‘’skier’’ be substituted for the word ‘’ski runner’’ throughout the SCGB rules. Despite strong protest from E.C Richardson, the council’s recommendation was put to the vote and was passed with a majority of 11-5, bringing in terminology which is still used around the world today. Other rule changes suggested by the council at the 1933 AGM can be seen in the photo below. 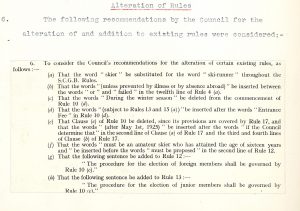 1934 saw the departure of retiring President Schuster, with the council expressing that they were under great debt for the time he gave for the Ski Club and everything he achieved in his two-year tenure. Schuster was replaced by Sir Eric-Holt Wilson (pictured below), who began his term by attempting to address a number of issues which were causing friction within the organisation. 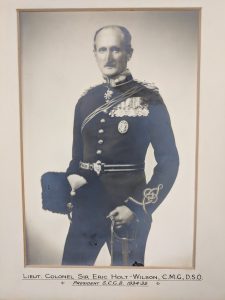 One of the issues that faced the council was the appointment of club officials at ski resorts around Europe. It had become apparent that club officials had been appointed at ski resorts in 1933 despite there being a lack of work to be done for the SCGB, making the trips an unnecessary expense for the Ski Club. Honorary Secretary Mr Seligman was particularly unhappy with this, suggesting a change to Rule 17 that meant ‘’no appointments be made merely in order that a member of the club should obtain a free or cheap holiday but that such appointments be restricted to cases where there was definite work to be done for the SCGB[iii].’’ It was decided that a formal letter be sent to all members who were guilty of obtaining a ‘free or cheap holiday’, setting out the standards expected of them, complete with an acknowledgement slip to be sent back to the SCGB.

There was also discontent among some of the council relating to payments of £200 and £74 made to the secretaries of the Editors of the ‘Ski Notes and Queries’ book. Mr E.H Houghton controversially suggested that the Editors and their secretaries be replaced by members who would be able to carry out the work without requiring payment, since the work of the Editors was not arduous. Despite Mr Houghton feeling passionately about the subject, President Wilson would not allow Mr Houghton the opportunity to air his views further as there was no mention of his issue on the agenda.