Ski Sundae: cafés and cocktails in the Ski Club of Great Britain archive

Like all the best start-ups, it began in a café with a small group of people, a shared interest and a new idea. The Ski Club of Great Britain was born at the Café Royal, London on 6th May 1903. One hundred and sixteen years later, the tradition of celebrating important moments and sporting activities over a good meal is still going strong as the Ski Club hosts this year’s End of Season Party on 18th May.

That first meeting was a genteel and informal affair as fourteen well-heeled gentlemen enjoyed the fine food, fine wine and fine surroundings of one of the most fashionable establishments of the day. Over dinner,

“it was agreed to found a ski club…[as] It was pointed out by those who spoke, that the sport had now gained considerable ground in this country, and that an institution was needed which could assist its members in such matters as where to go, what sort of ski to purchase, from whom initial instruction could be had, and what the general condition of the snow was in such and such a place at such and such a time of year, &c.”

(From a letter to the press entitled ‘Ski Club of Great Britain’, signed by E. Syers, E.H. Wroughton and E.C. Richardson).

The original menu for this dinner, signed by the founding members, is a prized piece of the Ski Club archive. 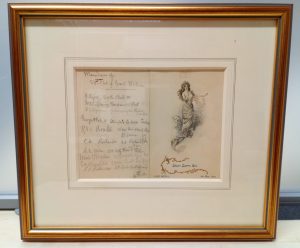 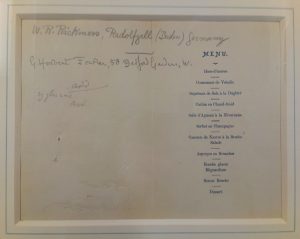 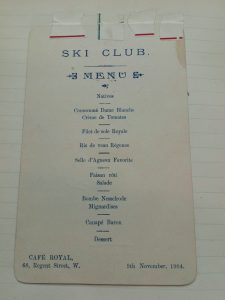 The following year, another dinner was held at the Café Royal, this time following the Annual General Meeting, a tradition which was to be upheld for decades to come and which brought members of the Committee together with ordinary members, often with a noted guest speaker. As the detectives amongst you may have spotted in my last blog post, in 1912 it was Sir Arthur Conan Doyle.

The cuisine on offer in 1904 included ‘Bombe Nesselrode’, the most popular ice pudding of the nineteenth century according to historicfood.com and a clear inheritance from the bygone Victorian era.

Underlining the importance of dinners to the Ski Club and assuring its place in history, the dinner menu was once again used as an attendance record and firmly stuck into the minute book for safe keeping. 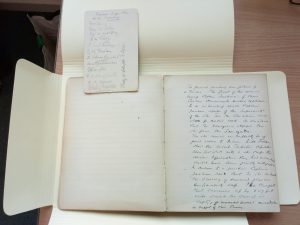 In 1924 the Club held a dinner to celebrate an important milestone in its history: its twenty-first birthday. The location this time was the Hotel Cecil, another renowned venue for dining and dancing, once the largest hotel in Europe. The cover of the menu has been specially designed to incorporate the trefoil logo of the Ski Club of Great Britain in its border and it features an image of a skier. Inside, we learn that toasts were raised to the King, to the Club’s founder members, some of whom were still involved in the running of the Club, and to the Club itself. Perhaps the Coupe Glacée on offer for dessert was the first ever ski sundae? 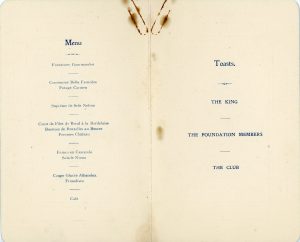 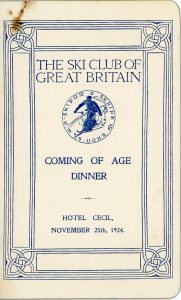 The Club logo has been incorporated into menu design many times since, as in this example (undated). 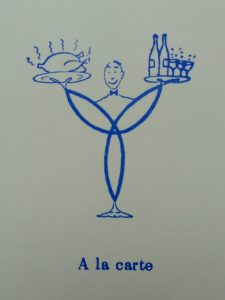 By the 1930s there was an Entertainments Committee to organise formal dinners and much more besides. In this report from 1934 the music suggested for the Spring Dinner seems to range from a dance band (Ted Sommerfield’s No. 1 Band of seven musicians – does anyone know anything more about them?) to Swiss waltzes and an accordion, an interesting mix of traditional and more current musical styles of the time. The Report also mentions an Exhibition of Ski-ing Films and a lectures by two great figures in ski-ing history, Gerald Seligman and Arnold Lunn. 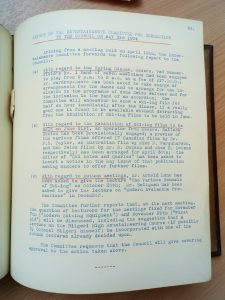 An orchestra, a steel band and a discotheque provided the entertainment at the 1971 Ski Club Ball, continuing the Club’s penchant for mixing musical styles, but this time there was an opportunity to rest weary dancing legs and regain some energy before the journey home: hot soup was served to all attendees from 2 to 2.30am! 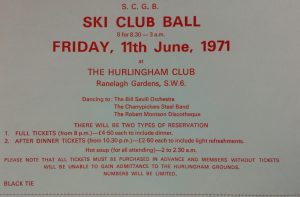 Auprès-ski rather than après-ski, the Ski Club dinner has a long and joyful history of bringing members together to celebrate their Club and their sport. If photographs could talk perhaps the attendees at this Ski Club Dinner eighty years ago would raise this toast to all those current members who will be at the End of Season Party on 18th May: cheers! 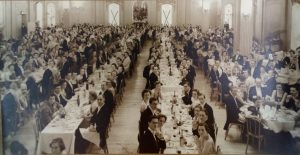