I was chatting to a researcher recently about how learning about local history has changed his perceptions. Walking around Leicester he sees unfolding around him the city he has read about and seen in old photographs and maps: a building rises and falls, landscapes open up, cars disappear.

I feel the same way walking around the DMU Campus and thinking about all the changes which have occurred on the site since DMU first came here in 1897 (as the Leicester Municipal Technical and Art School, based in just one wing of the Hawthorn Building). It is so enjoyable to look back at old photographs of the campus and make note of these differences – and the aspects which remain unchanged.

For example, here is a view of the Clephan building from around 1970, and the modern scene: 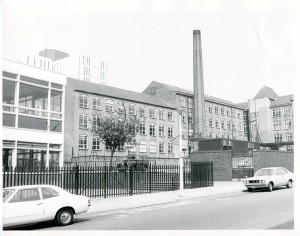 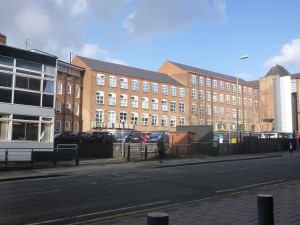 The Clephan Building was a hosiery factory belonging to I. & R. Morley Ltd. The original building was first constructed in 1885  with extensions added in 1888, 1901 and 1914. the factories closed and the building was sold to the education authority in 1967. The chimney was demolished in 1993.

I find it fascinating just how much of the campus is steeped in Leicester’s rich industrial past – Clephan is just one of several campus buildings which started out as factories or warehouses.

When I was 13 every careers questionnaire I did at school suggested I become an archivist. In rebellion I studied History of Art at Cambridge and the Courtauld Institute before giving in to the inevitable and undertaking a qualification in Archives Administration at Aberystwyth University. I worked at King’s College London Archives and the London Metropolitan Archives before becoming the Archivist here at DMU in January 2013. My role is hugely varied: answering enquiries and assisting researchers, sorting, cataloguing, cleaning and packaging archival material, managing our environmentally controlled storage areas, giving seminars, talks and tours, researching aspects of University history, liaising with potential donors and advocating for the importance of archives within the organisation. I am one of those incredibly fortunate people who can say ‘I love my job’ and really mean it.
View all posts by Katharine Short →
This entry was posted in Archives and tagged architecture, Clephan, factories, heritage, history, hosiery. Bookmark the permalink.