To ‘shee’ and not to ‘ski’? That was the question…

…puzzling winter sports enthusiasts in 1928. Ski Club of Great Britain (SCGB) member Mr. G. D. Greenland was so concerned that he raised the matter in a meeting. 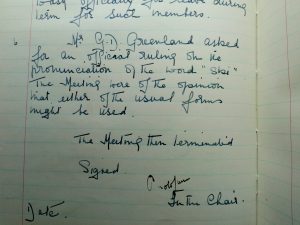 The meeting minutes, which are preserved in the SCGB archive held by De Montfort University Special Collections, record that he “asked for an official ruling on the pronunciation of the word “ski”. The Meeting were of the opinion that either of the usual forms might be used.”

Ski history buffs will note that this answer was endorsed by the famous Arnold Lunn, an important figure in the development of the sport, as Chair of the Committee.

While Mr. Greenland may have been reassured to know that he could use “either of the usual forms” of pronunciation of the word ski, today the answer leaves us a little confused. Surely the word is pronounced ‘sKi’ with a hard ‘k’ sound in the middle? Given the spelling, how could there ever have been any doubt?

Go back twenty years to 1908 and the cause for uncertainty begins to emerge. Skiing was a new sport in the midst of development from a Nordic way of life to a codified competitive pastime enjoyed initially by a wealthy elite of mainly British pioneers. The Ski Club of Great Britain itself had been in existence only five years. British skiers looked to Norway’s long history of skiing for inspiration. 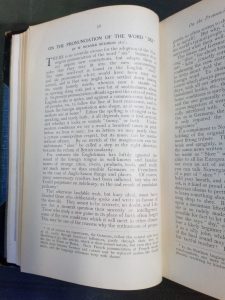 In the Alpine Ski Club Annual of 1908 W. R. Rickmers, another pioneer of skiing, wrote an article ‘On the Pronunciation of the Word “Ski”.’

Here he explained that ‘ski’ is a loanword from Norwegian. Britain not having historically been a nation of skiers, there was no existing word in English.

The debate over pronunciation was a debate about whether to use the original Norwegian pronunciation, which approximates to “shee” in English, or to read the word as the spelling would suggest it to sound in English: “skee”.

In spite of the fact that twenty years later Mr. Greenland remained unsure, in 1908 a consensus seemed to have been reached and Rickmers was not happy about it:

“There is no scientific excuse for the adoption of the Norwegian pronunciation of the word “ski”… The same root word is found in the English “skid,” and ski pronounced s-k-ee would have been easy and natural…”

Rickmers sees the preference for Norwegian pronunciation as a “laudable wish” but ultimately “mistaken pedantry” and even “snobbishness” which makes little sense and is inconsistent with historical precedent since “[f]or centuries the Englishman has loftily ignored the sound of the foreign tongue”.

Rickmers himself had been using his preferred pronunciation of ski (as we say it today) for years, and had even formulated his own spelling. On 5th May 1903, the day before the Ski Club of Great Britain was founded, Rickmers delivered a speech to The Alpine Club entitled “The Alpine Skee and Mountaineering.” 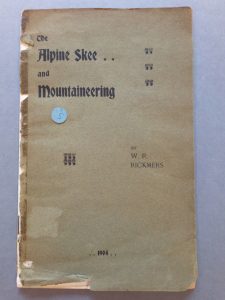 The “shee” pronunciation still found favour, however. Key figures in the history of the sport took the opposite view to Rickmers. The very first sentence of ‘The Ski-Runner’ by E. C. Richardson (1909), a classic text written by a founding father of skiing, reads:

“Let us begin with a brief description of the ski themselves, premising that the way to pronounce ski is “she”, as in “he, she or it.” 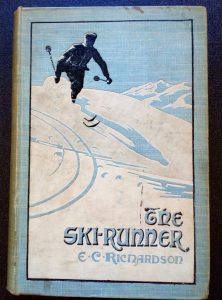 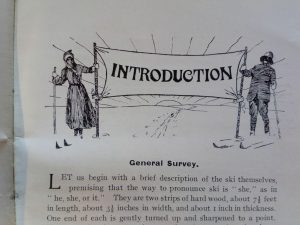 The matter settled, Richardson moves on to other concerns. Given so definite a verdict by so notable and influential a figure, in a book so widely read, it becomes easier to understand how the “shee” pronunciation took hold in the first few decades of the twentieth century.

But it was not to last. Skiing grew in popularity and by the late 1920s when Mr. Greenland asked his question, the Ski Club of Great Britain had grown from a founding committee of 6 men to a membership of nearly 3,000. Members learned about the latest skiing techniques, equipment, resorts, tours, competitions and social events through Club publications such as Ski Notes and Queries and the British Ski Yearbook. In an era without television and in the very early days of radio, the chances are that many skiers seldom heard anyone talking about skiing before they read someone write about it. It can be difficult to pinpoint when and why language change occurs, but perhaps Rickmers was right when he observed that it is

“…the common sense habit of all peoples…to follow the line of least resistance, and to knock the foreign importation into shape, as it were, for immediate use at home.”

It appears that not even the authoritative instructions of well-respected pioneers were enough to counteract the phonetic temptation to say it like you see it. Language evolves through use and the ‘shee-ers’ of the early twentieth century evidently found sentences such as “she shees down the shee slope” too much of a tongue-twister to cope with.